For days, a frustrated and simmering president fumed inside the West Wing residence about what aides said he saw as his staff’s inadequate defense and the ineffectiveness of his own tweets….“I turn on the T.V., open the newspapers and I see stories of chaos,” Mr. Trump said as he attempted — with little discipline — to read from prepared remarks listing his accomplishments since being inaugurated one month ago. “Chaos. Yet it is the exact opposite. This administration is running like a fine-tuned machine.”

….It all made the brooding boss feel better, people close to Mr. Trump said. The news conference, they said, was Mr. Trump’s best effort at spitting the bit out of his mouth and escaping the bridle of the West Wing, where he views his only way to communicate his side of any argument is his 140-character limited Twitter feed.

The weird thing is that I suspect Trump believes this. Within his little bubble, everything really does seem to be running smoothly. He signs executive orders, holds “listening sessions,” meets with foreign leaders, and issues directives to his staff. He’s doing what he imagines a president should do, and figures that should produce presidential results. If the press says otherwise, then that’s prima facie evidence that the press is dishonest and has it out for him.

In other news, a judge has ordered EPA nominee Scott Pruitt to release thousands of emails he exchanged with fossil fuel interests while he was attorney general of Oklahoma. But he has until Tuesday to release them, and Pruitt’s confirmation vote is Friday:

Senate Democrats have latched onto the court case in a last-ditch attempt to delay Friday afternoon’s expected vote. “Sometime — a week from now, maybe days from now — my fear is that a number of members, especially on the other side, will have been put in a very bad position and asked to vote for a nominee that they otherwise may not have supported had they known,” Sen. Tom Carper (D-Del.) said on Thursday.

On the immigration front, it turns out that Trump is getting cold feet about ending DACA, the Obama program that protects illegal immigrants who were brought to the US as children. He thinks of himself as a guy with a heart, and hates the idea of doing something that will make him look callous. His staff, however, has no such qualms. The LA Times reports that they’ve come up with a couple of ways to end DACA without Trump himself doing anything:

Trump aides [are considering] new legal guidance that details who is a priority for deportation. If the Justice Department determines that DACA is not legal or is no longer a responsible use of prosecutorial discretion, the Department of Homeland Security would be instructed to stop awarding and renewing work permits.

Another possible path involves the courts. A handful of governors are considering a challenge patterned on the 2014 lawsuit filed by several conservative state officials against the Obama administration’s expansion of deportation protections. If they sue, Sessions could instruct his lawyers not to defend the program in court, exposing it to indefinite suspension by a federal judge.

With Trump, the buck always stops somewhere else. Finally, yet more people are leaving the Trump administration:

Shermichael Singleton, who was one of the few black conservatives in the Trump administration, had been working at the Department of Housing and Urban Development….Mr. Trump’s advisers turned up public writings by Mr. Singleton that appeared during the later stages of the campaign in which he was deeply critical of the candidate.

Can’t have that! Plus this:

Several White House staffers were dismissed Thursday morning after failing FBI background checks, according to sources familiar with the matter. Some of the aides were “walked out of the building by security” on Wednesday after not passing the SF86, a Questionnaire for National Security Positions for security clearance. 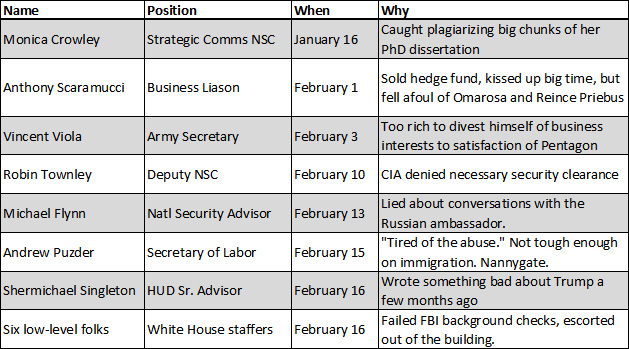