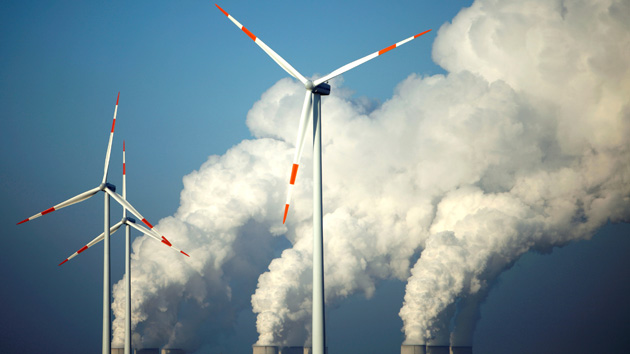 In the Wall Street Journal today, a couple of old-school conservatives propose a carbon tax as a response to climate change. But there’s a catch. Here are George Shultz and James Baker:

We suggest a solution that rests on four pillars. First, creating a gradually increasing carbon tax. Second, returning the tax proceeds to the American people in the form of dividends. Third, establishing border carbon adjustments that protect American competitiveness and encourage other countries to follow suit. And fourth, rolling back government regulations once such a system is in place.

….The eventual elimination of regulations no longer necessary after the enactment of a carbon tax would constitute the final pillar. Almost all of the Environmental Protection Agency’s regulatory authority over carbon emissions could be eliminated, including an outright repeal of President Obama’s Clean Power Plan. Robust carbon taxes would also justify ending federal and state tort liability for emitters.

Schultz and Baker recommend a $40 per ton “tax and rebate” scheme that would be progressive because it returns a bigger proportionate share of the tax to working families than to the rich. And since it’s revenue neutral, presumably Grover Norquist wouldn’t issue a fatwa against it.

Now, this is all pie in the sky, since Republicans will never agree to it. But how about liberals? What should they do if this deal were on the table?

For starters, $40 per ton of carbon1 is about the equivalent of 40 cents per gallon of gasoline and 10 cents per kilowatt-hour of coal-fired power. Coal is already declining because it’s not price competitive with natural gas, and a carbon tax would pretty much put it out of business for good. Gas plants would remain competitive compared to wind and solar, but only barely. As solar prices come down and the carbon tax rises, even natural gas plants would become uncompetitive. Here’s the effect on coal from a study by the Energy Information Administration: 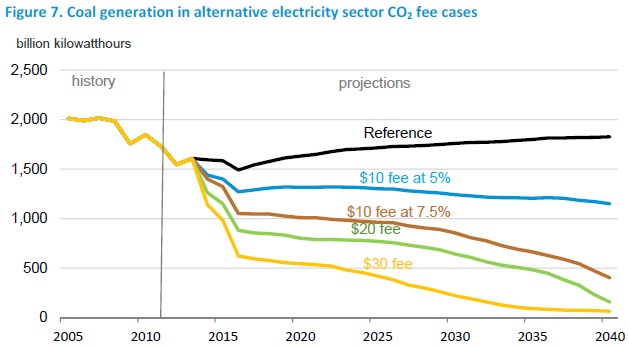 So that’s all good. But what regulations would get tossed out? There are two main categories: regulations on power plants and EPA’s CAFE standards for cars and trucks. My guess based on the relative numbers is that a $40 per ton carbon tax would probably be as effective as current regulations when it comes to power plants. Giving up those would probably be a good trade. However, it would almost certainly be too low to have much effect on driving and fuel economy. CAFE standards aren’t perfect, but they have succeeded in substantially raising the fleetwide fuel economy of cars and trucks. The carbon tax wouldn’t—at $40 per ton, anyway.

Here’s an illustration from the EIA study. They looked at a $20/ton tax on electricity generators vs. a $20/ton tax on all carbon sources. There’s virtually no difference. The tax on power plants has a big impact, but expanding the tax to gasoline accomplishes almost nothing. It’s just too small to have much effect. 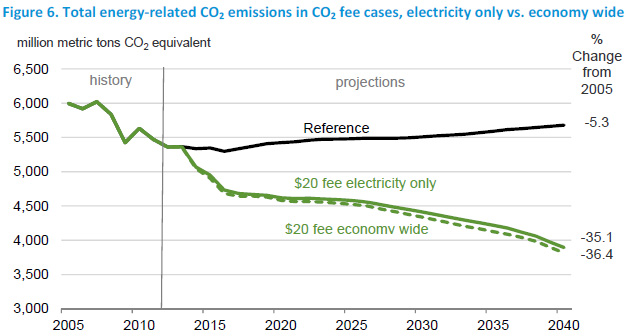 Of course, in this study EIA was assuming that CAFE standards stayed in place. A carbon tax would obviously have a bigger impact if there were no other regulations already pushing up fuel economy. However, even with CAFE repealed it wouldn’t be enough—though there is a possible compromise: a $40 per ton carbon tax plus another 60 cents per gallon tax on gasoline. As a side benefit, the gasoline tax would also provide the revenue to fund significant amounts of infrastructure repair. Offer me that, and I might well be willing to give up nearly2 all EPA regulations on carbon.

Of course, I’d want to know just how “gradually” the carbon tax is going to rise. One approach to this might be to target certain regulations for immediate repeal and others for repeal only when certain tax levels are met.

As always, the devil is in the details. But a carbon tax plus a gasoline tax in return for an end to EPA regulation of carbon might be a deal worth looking at. I doubt that the subject will ever seriously come up, though.

UPDATE: Here’s an interesting calculation. The EPA has allowed auto manufacturers to trade greenhouse gas permits since 2012. This paper, in the middle of a bunch of math, says “In the first-order condition λ is the shadow value of the CAFE constraint. With permit trading this shadow value equals the permit price.” Meanwhile, this paper estimates that the current permit price is roughly $40 per Mg. One megagram is about a ton, so the permit price is in the neighborhood of $40 per ton.

1This is actually $40 per ton of carbon dioxide, which is a common measurement. I assume that’s what Schultz and Baker are talking about too, though their op-ed doesn’t provide that level of detail.

2There are some exceptions. For example, methane leaks wouldn’t be affected by a carbon tax. The only way to reduce them is by ordinary old regulation. There are some other exceptions too.