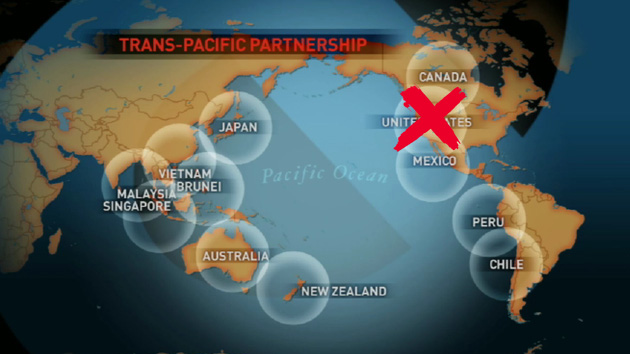 The TPP trade deal, which has been effectively dead for over a year, got a final stake through its heart on Tuesday when President Trump signed an order pulling the US out. But that doesn’t mean the rest of the world is standing still:

The Australian government will push ahead for a Trans-Pacific Partnership trade deal without the United States and is open to Indonesia, China and others seeking to join the agreement….On Monday evening, the prime minister, Malcolm Turnbull, reportedly confirmed Australia’s commitment to the TPP in a phone conversation with Japan’s prime minister, Shinzo Abe.

So that’s that. We’ve given up trade leadership in the Pacific, which means that either trade negotiations will continue without any regard for US interests, or else they’ll continue under the explicit leadership of China. Neither one is especially good news for us, and there’s no special reason to think that Donald Trump’s beloved bilateral trade agreements will be any better than TPP would have been.

So what was the beef with TPP, anyway? There were three things. The first two are what I call the egghead complaints:

ISDS. This is a method for resolving complaints from investors who claim that national laws are interfering with their rights under a treaty. ISDS is very commonly used in international treaties, including in NAFTA, and in practice it’s never caused much heartburn for the US. But as investors have used it more often, it’s made people increasingly nervous about what it might evolve into. Lefties in particular are afraid that secretive international tribunals will allow multinational corporations to evade labor laws and environmental regulations simply by claiming that they undermine rights guaranteed by TPP. And I suppose that’s possible. You never know what the future holds. That said, ISDS was never a serious complaint. A modified version of ISDS could have been negotiated if it was a real deal-killer, or, like Australia, the US could have demanded an exemption from the whole system.

Intellectual property. Generally speaking, countries like Vietnam benefit from TPP because it provides them with greater access for their most valuable exports: manufactured goods. In return, countries like the US benefit because it provides greater protection for their most valuable exports: movies, drugs, music, and other patentable and copyrightable goods. This is pretty standard horsetrading, but plenty of American liberals dislike the idea of forcing our patent laws on poor countries. The problem is that without this, there’s really nothing much in TPP for the United States. Poor countries manufacture stuff. Rich countries design and research stuff. Any modern treaty that has something for both sides will end up dealing with both goods and intellectual property.

Neither of these, however, is what really drove opposition to TPP during the past year. If you listen to Bernie Sanders and Donald Trump, the problem with TPP is simple:

American workers will lose jobs. It’s hard to know what to say about this. Most analysis suggests that TPP will have a positive impact on GDP and jobs, but that the impact is so small that it’s barely noticeable.

Small or not, though, the responsibility of trade deals for the decline of manufacturing in the US has become practically holy writ over the past year. Is this legit? Over at Vox, Brad DeLong says no. Period. However, his post is 8,000 words long, and ominously, over at his own site he says that it does “only a third of what I wanted to do.” Clearly, then, we need a shorter Brad DeLong. Here it is:

Very roughly speaking, DeLong’s argument is this: everyone agrees that Germany is the poster child for an advanced economy with a great manufacturing policy. And yet, their manufacturing employment has steadily declined for the past half century too, just like ours. So if this has happened to Germany, there’s not much of a case for suggesting that the US has done anything especially wrong over the past 50 years. We’ve simply evolved from a (relatively) poor manufacturing nation into a (relatively) rich services and technology nation. This has nothing much to do with trade policy, either. It’s just what rich countries do. What’s more, it’s a decidedly good thing overall, even if it does affect a smallish number of people badly.

Now, you should click the link and read all 8,000 words if you want to understand the details. For example, DeLong says that, actually, Germany has done a little better than us. Good policy might have saved about 12 percent of our manufacturing jobs. On the flip side, he also tells us that the people badly affected by manufacturing losses aren’t generally affected that badly. “Your income over the next 20 years turns out to be about 10 percent lower than the income of similarly situated people who are not caught in a mass layoff. You don’t, as a rule, permanently go from a $35-an-hour manufacturing job to a $9-an-hour McDonald’s job.”

Still, some people do suffer from manufacturing losses, and 10 percent isn’t peanuts. The usual neoliberal response is that we should use the overall benefits from trade deals to compensate the small number of losers. The problem, as DeLong acknowledges, is that no matter how much we chant that mantra, we never seem to actually do it. So it’s hardly surprising that working-class folks are decidedly cynical whenever they hear grand promises about retraining and relocation benefits and so forth. That’s what made opposition to trade deals such a powerful source of demagoguery for Donald Trump and Bernie Sanders over the past year.

Here on the left, in fact, neoliberal—to the extent that it still has any meaning—is usually used as a synonym for corporate Wall Street shill. And that’s when critics are being nice. But I persist anyway. Despite its flaws—and there are many—the neoliberal project, which includes broad trade agreements like TPP, has produced big benefits for both rich and poor countries alike. I’ll continue to fight for better redistribution of the benefits of these deals, but I won’t let the perfect be the enemy of the good. Neither ISDS nor intellectual property are great reasons to oppose TPP, nor is it likely to cost us any jobs.

In fairness, I’ll concede that TPP won’t do a huge amount of good either. It’s a decent treaty, but not a bombshell. Still, the good outweighs the bad, and abandoning it cedes trade leadership in the Pacific to the very-much-worse-than-neoliberal leaders of China.

I’m not blind or deaf, and I understand that this is obviously not the right time for more trade deals, but I nonetheless wish that cooler heads had prevailed and we’d let this one pass. It would have sent a strong signal to other countries that the US wants to do business with them; that we support the continued expansion of liberal capitalism; and that we intend to maintain ourselves as a leader and counterweight to illiberal China in the Pacific. It’s a small opportunity missed, but still an opportunity missed.

NOTE: And one more thing. Hillary Clinton didn’t lose because she was soft on trade and lost the votes of disgruntled working-class whites. She lost because of James Comey’s letter. Don’t let anyone sucker you into believing otherwise.