Jeff Stein reports on Democratic plans to fight any attempt to repeal Obamacare:

“We are united in our opposition to these Republican attempts to Make America Sick Again,” Schumer said, cracking a slight smile at the inversion of Donald Trump’s campaign slogan. The line suggests that Schumer wants to reframe the fight over Obamacare into one about the broader GOP health care agenda, which includes proposals to change Medicaid andMedicare.

Since the health care law passed in 2009, Schumer and other Democrats in Congress have learned that defending it can be a political loser. Republicans stayed unified in their opposition, and public opinion stayed on their side. But in their final push to save it, Democrats are moving the battle to new turf, fighting over Americans’ shared frustration with the inadequacies of the country’s health care system, not the law itself.

This is sadly true. Democrats have never been willing to defend Obamacare, and they still aren’t. It’s crazy. Obamacare isn’t perfect. Nothing this side of the pearly gates is. But if politicians limited themselves to defending programs with no problems, we’d never hear from them again.1

But considering where we started—with a Rube Goldberg medical system dominated by well-heeled special interests and all but indifferent to the near-poor—Obamacare is almost miraculously close to perfect. I know that Republicans have convinced everyone otherwise, but take a look at the results of this Kaiser tracking poll from November. Virtually every single aspect of Obamacare is not just popular, but very popular: 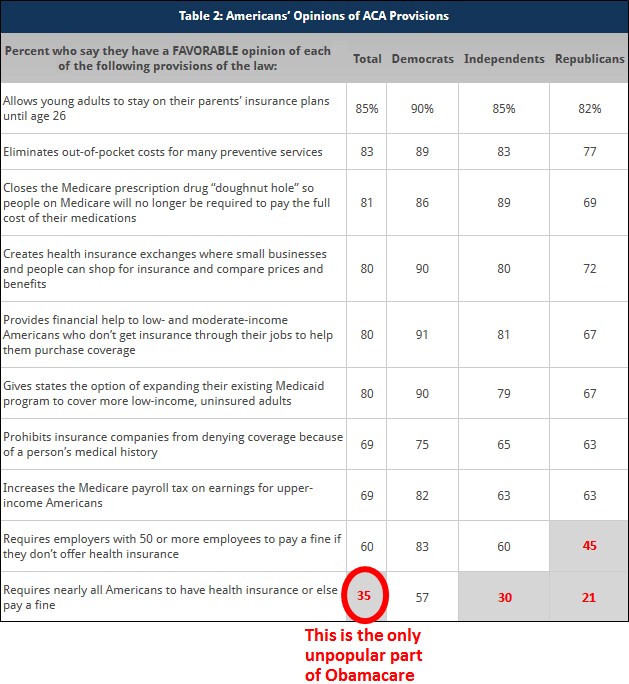 What’s more, Obamacare has been a huge success. It’s provided health coverage to 20 million people. It’s massively reduced the cost of health coverage for low-income families. It’s slashed the number of uninsured by half among blacks and whites and by a quarter among Hispanics. It’s allowed people with expensive chronic illnesses to get treatment. It will help keep overall health costs down in the future. It’s had no negative impact on the employer health care system. And it’s done all this without raising the deficit. In fact, it’s cut the deficit.

And yet, Democrats are still afraid to defend it loudly and proudly. This just boggles me. Sure, Obamacare has some problems. Certain regions don’t have enough competition. Deductibles are high if you buy a bronze plan. And a small part of the population has been hit with large premium increases.

But this is something like 10 percent of Obamacare. The other 90 percent is purely positive. Why are so many liberals unwilling to say so? Why aren’t they willing to defend Obamacare with the same fervor they defend other imperfect programs, like Medicare or the ADA or the Clean Air Act or Social Security? Obamacare is at least as good as any of them. But no one will ever believe it if Republicans are attacking it relentlessly while Democrats mutter resentfully that there’s no public option and politicians hide in their offices in the hope that nobody will blame them if their premiums have gone up.

If Democrats aren’t willing to defend Obamacare, it’s hardly a surprise that Republicans feel free to go after it without consequence. Maybe they should start.

1Yes, I know, that might not be a bad thing.