Wesley Smith is an absolute foe of assisted suicide in any form, for any reason, at any time. For that reason I don’t usually read his stuff over at National Review. We disagree, and that’s that.

But things are slow today, and I found his latest sort of interesting. He’s furious over an interview of Timothy Quill, an advocate of assisted suicide, despite the fact that Quill is very deliberately taking a moderate view. The interviewer basically asks him if people 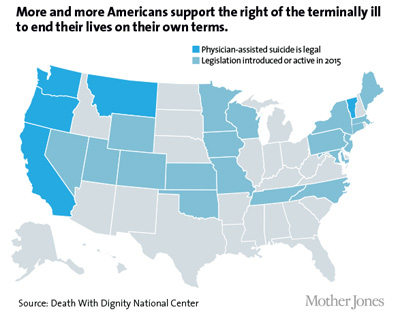 should have access to assisted suicide drugs regardless of their reason, and Quill says no:

In my opinion, the more you have terminal illness with severe physical suffering as a major piece of the puzzle, the more you’re on solid ground….That envelope will get tested as we move along with this, so we are going to need to find edges to it. Severely terminal illness is a good edge. It’s not the firmest edge in the world, but it’s a good edge, and predominant physical suffering as a piece of the puzzle seems to me a good edge.

Obviously Smith disagrees with even this much, but at least Quill is setting limits. Yet Smith is still outraged. Why?

Baloney. Not one law in the United States allowing physician-assisted suicide requires proof of physical suffering to obtain a lethal prescription….Moreover, the statistics from Oregon and elsewhere show that very few people commit assisted suicide due to physical suffering. Rather, the issues are predominately existential, such as fears of being a burden or losing dignity.

….As I said, assisted suicide advocates are so full of crap.

But Quill isn’t especially making the case that physical suffering is a major component of assisted suicide laws, he’s using it to argue against broadening the justification for assisted suicide to include “psychological or spiritual suffering.” You’d think Smith would appreciate at least that much, but apparently not.

In any case, I think Smith is missing something here. It’s true that most people with terminal conditions don’t name physical suffering as a primary reason for wanting to die. But it’s a significant consideration anyway. First, there’s fear of physical suffering as their disease progresses. Second, there’s fear of losing control. That is, there’s a fear that at some point they’ll become physically unable to control their own destiny, including the option of assisted suicide if they want it. Would you call that “physical suffering”? I’d put it in that category. It’s not related to depression or fear of being a burden. It’s a clearheaded fear of almost certain future physical decline that will take away the ability to choose their treatment.

However, on one thing Smith is unquestionably correct: the assisted suicide laws on the books today don’t require a show of physical suffering. So the whole conversation is moot anyway. Nor do I see what good it would do if they did. It would just require patients to claim they were in a lot of physical pain. There’s no way to prove this one way or the other, so why bother?