There’s been an ongoing debate for the past few weeks over a weighty topic: should we pay attention to every damn thing Donald Trump tweets?

Argument for: He’s president-elect. If he says something, it’s news.

Argument against: His tweets are just shiny objects meant to distract us from the more boring but far more important ways he’s destroying our great nation.

Today brings evidence for ignoring the tweets. Earlier this morning, for no particular reason, Trump decided that we should cancel the contract for a new pair of Air Force Ones. Why? Trump says they’re too expensive. My guess is that he’s just mad that they won’t be ready until 2024, which means the president after him will get a better plane than the POS he has to fly around in.

Anyway. This is big news everywhere. It’s on CNN, it’s on the front pages of all the newspapers, and a Google search for “Air Force One” brings up a results page that’s dominated by Trump’s tweet.

If there were ever a shiny object, this is it. It came out of the blue. It’s completely ridiculous. Trump obviously has no idea what goes into these planes. (Hint: surviving a nuclear war.) It will never get seriously followed up. It’s just 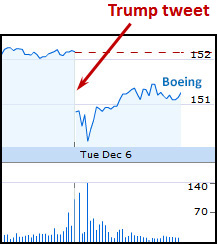 random crap designed to get him some attention. Why are we wasting our time with this?

UPDATE: Maybe there’s more to this than I thought. Last year, after a century of producing planes in the US, Boeing began construction of a plant in China. It also gets a lot of its business from Chinese airlines, and perhaps privately told the Trump team that it was nervous about Trump’s outreach to the president of Taiwan. Historically, after all, Boeing is one of the first to suffer when China gets mad. Plus it turns out that this wasn’t just harmless guff: Boeing stock dropped about 1.5 percent after Trump’s tweet.

I’m still not sure about how much attention we should give to Trump’s tweets, but now you know both sides of the story. Except for one thing: what does Trump have against Boeing? That’s still a bit of a mystery.