The volume of hot takes about how Hillary Clinton—and Democrats more generally—blew the election is getting way, way out of hand. Of course Clinton made mistakes. Every campaign makes mistakes. But her margin of loss was only 80,000 votes among three states. She won the popular vote by 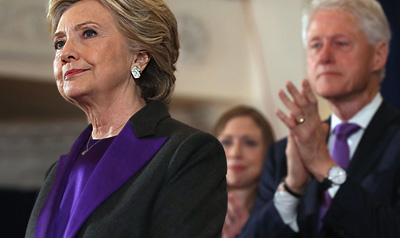 2 percentage points. She outperformed the econometric models. And she accomplished this despite the headwind of the Comey letter, the Russian hacks, and the media’s insane preoccupation with her email server.

Over at the Niskanen Center, Jacob Levy has written a much-discussed piece about identity politics. But he also makes some more general points about how this election unfolded:

The pundit’s fallacy when applied to losses takes the form of a morality play: because you fools did the thing I don’t like, the voters punished you. [Mark] Lilla solemnly noted that “those who play the identity game should be prepared to lose it.”

….The [white] backlash hypothesis is of this sort. Trump got a lower share of the white vote than Romney did (58% vs 59%)….Fundamentally, voting patterns didn’t change enough between 2012 and 2016 to justify big claims about new national moods or about Trump’s distinctive appeal. I believe the consequences of this election will be deeply abnormal. But the voting behavior that brought it about was, in the end, very normal.

An 80,000 vote margin in a 137 million vote election, about .05%, is susceptible of almost endless plausible explanations….But anyone trying to generalize about popular beliefs or the electorate’s mood should be very wary of any of them….An explanation that…implies some large shift in opinion or mood toward Trump, is a bad explanation overall.

So too is any explanation that is incompatible with the observed variation in the polls over the course of the campaign. The worst moments for Trump’s campaign focused on egregious episodes of political incorrectness….In other words, the more the electorate focused on his proud political incorrectness, the more they recoiled from him….[This] didn’t stop a normal level of white voters from voting for him.1 But the poll evidence suggests that they were most reluctant to support him at the moments when these things were most vividly on their minds.

Everyone wants to draw big, world-historical lessons from this election. That’s understandable, since the result was the election of an unprecedentedly dangerous and unqualified candidate. But the data just doesn’t support any big lessons. Barack Obama won the popular vote in 2012 by 3.9 points. Hillary Clinton won the popular vote in 2016 by 2.1 points. That’s less than a two point difference, despite the fact that Obama is unusually popular and Clinton had to run after eight years of Democratic rule. In the end, she did slightly worse than Obama, which is about what you’d expect. Unfortunately, a little too much of that “slightly worse” happened to be in three must-win states. 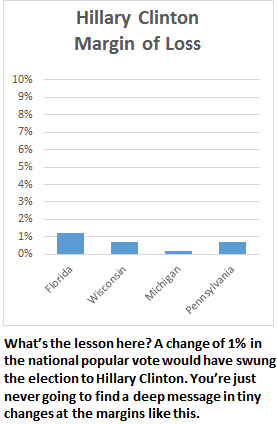 massive FUBAR from the Democratic establishment. The moderates blame extremism on social issues for alienating the rural working class.

These have one element in common: All these people thought all these things before the election. Now they’re trying to use the election to prove that they were right all along, dammit. But they weren’t. This election turned on a few tiny electoral shifts and some wildly improbable outside events. There simply aren’t any truly big lessons to be drawn from it.

But that doesn’t make anyone feel good, and it doesn’t make good fodder for a “smart piece” on what happened. There has to be someone to blame when something bad happens. But sometimes there isn’t.

Except for James Comey. Feel free to blame him all you want. Unfortunately, there aren’t really any lessons to be drawn from that.

1OK, fine, you want a big lesson? Here it is: our country is now so polarized at a partisan level that it almost literally doesn’t matter who runs. Republicans will vote for the Republican and Democrats will vote for the Democrat. There’s probably not much more than 3-4 percent of the population that’s truly persuadable anymore.

POSTSCRIPT: This is all about national-level politics. I don’t think there’s any question that Democrats took a huge beating at the state and local level, where they were already weak. If you want to write a smart piece about what’s wrong with Democrats, that’s the place to start. Forget Hillary Clinton. Tell me instead why Democrats have such dismal prospects at the state level.