S&P says that Obamacare isn’t failing at all: 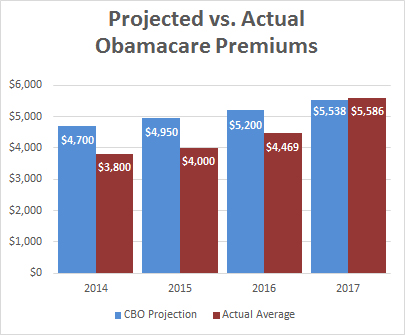 SEP rules also helped this year-over-year improvement. We expect the full-year 2016 underwriting losses to be lower than in 2015 and 2014.

….Insurers have put in meaningful premium rate increases for 2017…[but] we view 2017 as a one-time pricing correction….For 2017, we believe the continued pricing correction and network design changes, along with regulatory fine-tuning of ACA rules, will result in closer to break-even results, in aggregate, for the individual market, and more insurers reporting profits in this segment.

Hey, how about that! Now that insurers are pricing their coverage about where the CBO expected it to be, they’re starting to move toward profitability. Who could have guessed that?

That’s it. But Democrats were fixated on Obamacare costing under $1 trillion (over ten years), and that prevented them from creating a program that people truly would have loved. If, instead, they had supported funding of, say, $2 trillion, generous subsidies would have continued into the working and middle classes; maximum deductibles could have been set much lower; and more insurers would have entered each local market. Combine that with stiffer penalties to back up the individual mandate and a lot more young people would have joined the insurance pools—and would have done so without resentment since the cost would truly be affordable. All of this together would have made Obamacare far more popular with the public and much easier to manage for insurers.

But where would that extra trillion dollars have come from? This is where the hack gap comes into play once again. If this were a Republican plan, and it were something they really wanted, they wouldn’t have bothered with funding. They would have just made up a story about medical inflation coming down (which it is) and broader health 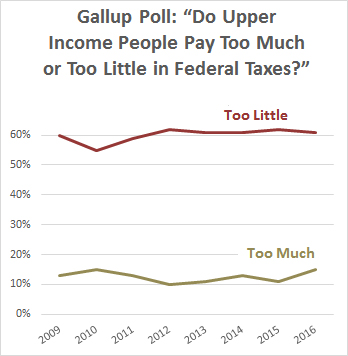 coverage leading to improved economic growth blah blah blah. Democrats weren’t willing to do that. Alternatively, they could have just funded a $2 trillion program. That would have meant even higher taxes on the rich and maybe some higher taxes all the way down into the upper middle class. Or maybe a small increase in the payroll tax. Who knows? There are plenty of possibilities.

But Democrats weren’t willing to be hacks and they weren’t willing to raise taxes more than they did. This is despite the fact that the public plainly doesn’t care much about deficits no matter how much they may say so, and the public is positively delighted with higher taxes on the rich. Multiple polls repeatedly show this by a wide margin.

This would have solved virtually every problem Obamacare has had. Higher taxes on the rich would have been a populist winner. Higher funding would have made the program genuinely affordable and far more popular. And the increase in both funding and the mandate penalty would have made the eventual insurance pool closer to what insurers expected, which would have kept them nearer to profitability and truly duking it out to gain market share against their competitors. It was a missed opportunity.