Sarah Kliff recently returned from a trip to Corbin, Kentucky, where she talked to a bunch of Trump voters about Obamacare. Her full story is here. I just want to excerpt a few comments from three of the interviews that Kliff conducted. First up is Kathy Oller:

Kliff: Trump campaigned on repealing Obamacare. Do you think he’s going to repeal all these programs that you’ve been signing people up for?

Oller: The funny thing is, my husband said, “You know, he’s going to eliminate health care.” But he really can’t totally take it out, because everybody has to have health care. You can’t go backward….

Kliff: Did you hear him talking about repealing Obamacare in the campaign?

Oller: Yeah, he was going to get rid of it. But I found out with Trump … he says a lot of stuff. [laughs] I just think all politicians 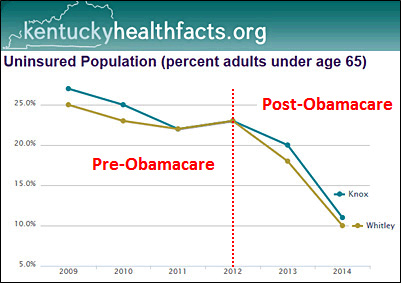 promise you everything and then we’ll see.

Next we have Debbie Mills:

Mills: The insurance we had before, we ended up paying about $1,200 a month for a family of five….For the past two years, we had the Healthcare.gov. It’s made it affordable….It’s been great to have health insurance, because I couldn’t imagine what it would be like to not have it with all the treatments and things that [my husband] had to have done.

Kliff: Do you think if it does go away, you’ll regret your vote in any way?

Mills: I don’t know. I guess I thought that, you know, he would not do this….I was thinking that once it was made into a law that it could not be changed, but I guess it can? Yes?

Kliff: It can be changed….

Finally we have Ruby Atkins:

Atkins: I don’t see how they can call it affordable care. I was paying two, three hundred dollars on my own when we did have insurance….And we had no deductible, we had … 100 percent coverage. [We had a] $5 copay to the doctor, $10 copay to the doctor; 100 percent if you go to the hospital [Kevin note: This is pretty obviously insurance she had while she worked for the local school district.]….

Kliff: Do you think Trump is gonna fix this?

Atkins: I think it’s got out of hand; there’s no way he’s gonna fix it. I think the whole thing, they’re going to have to go back to ground zero and start again….I don’t see no end in sight in all this. This is like … gas prices a few years ago. It’s just going to keep going up.

So we have two people who figured Trump was just blathering because, come on, what kind of person would take away people’s insurance? And we have one person who is upset because her Obamacare insurance costs more than the insurance she got when she worked for the public school system. We can complain about this all we want, but that’s the reality out there.

It’s funny. I was thinking about the hack gap the other day in a different context, but Obamacare is an example too. Obamacare has several smallish problems, but its only big problem is that it’s underfunded. The subsidies should be bigger, the policies should be more generous, and the individual mandate penalty should be heftier. Done right, maybe it would cost $2 trillion over ten years instead of $1 trillion.

Republicans wouldn’t have cared. If this were a real goal—like, say, cutting taxes on the rich—they’d just go ahead and do it. If the taxes didn’t pay for it all, they’d make up a story about how it would pay for itself. And if you’re Donald Trump, you just loudly insist that,somehow, you’re going to cover everybody and it’s going to be great.

But Democrats didn’t do that. They didn’t oversell Obamacare and they didn’t bust the budget with it. They could have. It would have added to the deficit, but that wouldn’t have hurt them much. Politically, the far better option was to go ahead and run up the deficit in order to create a program of truly affordable care that people really liked.

It’s not just pundits who have a hack gap. It’s the politicians too. And in this case, Democrats are paying the price for their lack of hackery.