Sam Wang has crunched the data from polls released in October to judge the effect of FBI Director James Comey’s letter on the election:

From opinion data alone, it is possible to estimate when a change occurred. This can test between alternative explanations, which include not only the Comey letter (October 28th) but preceding events such as the announcement of a hike in Affordable Care Act premiums (October 24th).

I calculated a day-by-day margin using polling data from the Huffington Post…After the Affordable Care Act premium hike announcement, opinion did not move for days…However, the big change does coincide well with the release of the Comey letter. Opinion swung toward Trump by 4 percentage points, and about half of this was a lasting change.

Naturally there’s a chart to go along with this. Here it is: 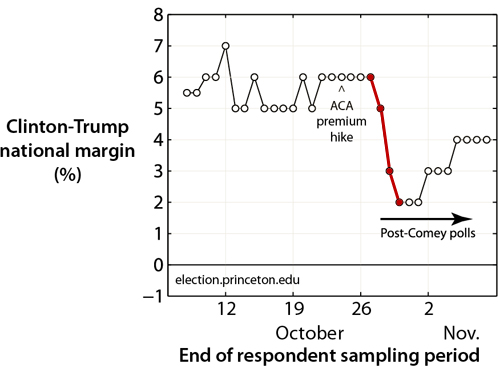 Hillary Clinton lost 4 points when the letter was released. She eventually gained back some of that, but it looks like 2 points were permanent. This jibes well with Nate Silver’s estimate that the Comey letter cost Clinton 2 points.

It is traditional at this point to acknowledge that lots of things affected the election: bad campaign strategy, rural blue-collar whites, etc. This is what you’ll read about in all the post-election thumbsuckers, but this kind of stuff happens to all campaigns. The Trump campaign certainly made lots of mistakes too, though no one talks about them anymore. The difference here is that things like the Comey letter don’t happen to all campaigns. This was an egregious intervention in the campaign by the director of the FBI, who was motivated at least partly by his fear of a rogue group of agents who were dedicated to Clinton’s defeat.

This is decidedly not normal. Comey knew exactly what he was doing. He was warned that it would be an unprecedented act of interference in an election. But he went ahead anyway, and went ahead in a manner perfectly calculated to do the maximum damage. The press played along and the rest is history.

Without Comey’s letter, Clinton likely would have won the popular vote by 4 points and the Electoral College by 300 votes or more. Who knows about the Senate? Maybe Democrats would have won that too. Eliminate the Russian ratfucking and Clinton would have won in a landslide. Instead, a game show host is about to be sworn in as president of the United States and everyone is convinced that the Democratic Party is practically on its last legs.