Andrew Gelman takes issue with my claim that Bernie Sanders would have been a sure loser if he’d run against Donald Trump:

My guess would be that Sanders’s ideological extremism could’ve cost the Democrats a percentage or two of the vote….But here’s the thing. Hillary Clinton won the election by 3 million votes. Her votes were just not in the right places. Sanders could’ve won a million or two votes less than Clinton, and still won the election.

….The 2016 election was just weird, and it’s reasonable to say that (a) Sanders would’ve been a weaker candidate than Clinton, but (b) in the event, he could’ve won.

I won’t deny that Sanders could have won. Gelman is right that 2016 was a weird year, and you never know what might have happened.

That said, I really don’t buy it. This sounds like special pleading to me, and it relies on a truly bizarre scenario. We know that state votes generally follow the national vote, so if Sanders had lost 1-2 percentage points compared to Clinton, he most likely would have lost 1-2 percentage points in Wisconsin, Michigan, and Pennsylvania too. What’s the alternative? That he somehow loses 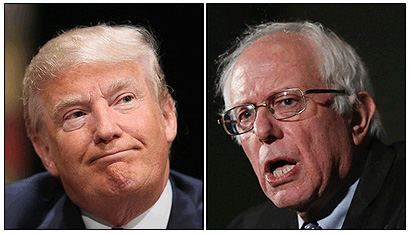 And lucky me, this gives me a chance to bring up something else: the assertion that Sanders might very well have won those Midwestern swing states that Clinton lost. The argument is that all those rural blue-collar whites who voted for Trump thanks to his populist, anti-trade views would have voted for Sanders instead. After all, he also held populist, anti-trade views.

But this is blinkered thinking. It focuses on one positive aspect of Sanders’ platform while ignoring everything else. Take all those white working-class folks who have sucked up so much of our attention lately. Sure, many of them voted for Trump. And sure, part of the reason was his populist economics. But it wasn’t just that. They also liked the fact that he was anti-abortion and pro-gun and wanted to kick some ass in the Middle East. Would they also have voted for a guy who opposed TPP but was pro-abortion and anti-gun and non-interventionist and in favor of a gigantic universal health system and promoted free college for everyone and was Jewish? A guy who is, literally, the most liberal national politician in the country?

Sure, maybe. But if that’s what you’re counting on, you might want to rethink things. It’s absolutely true that Hillary Clinton ran 5-10 points behind Obama’s 2012 numbers in the Midwest. It’s also true that Obama was the incumbent and Mitt Romney was a pro-trade stiff who was easy to caricature as a private equity plutocrat who downsized working-class people out of their jobs. Was there more to it than that? Perhaps, and that’s something for Democrats to think about.

Whatever the case, though, Sanders would have found it almost impossible to win those working-class votes. There’s no way he could have out-populisted Trump, and he had a ton of negatives to overcome. And that’s not even taking account of how Trump would have attacked him. Sanders hasn’t had to run a truly contested election for a long time, and he flipped out at the very mild attacks he got from Hillary Clinton. I can’t even imagine how he might have reacted to Trump’s viciousness.

But I will take this chance to clarify one thing. American politics is so polarized that both parties are pretty much guaranteed about 45 percent of the two-party vote. So when I say Sanders would have lost in a landslide, that’s all I mean. Instead of Clinton’s 51-49 percent victory in the popular vote, my guess is that Sanders would lost 47-53 or so. In modern presidential politics, that’s a landslide.