It’s hard to believe there’s any important non-Trump news out there, but the rest of the world keeps humming along without us:

OPEC representatives reached a deal to cut oil production after months of wrangling Wednesday, according to people familiar with the matter, in an effort to lift sagging prices and reassert the cartel’s influence over a market increasingly dominated by the U.S., Russia and others. Delegates from the Organization of the Petroleum Exporting Countries 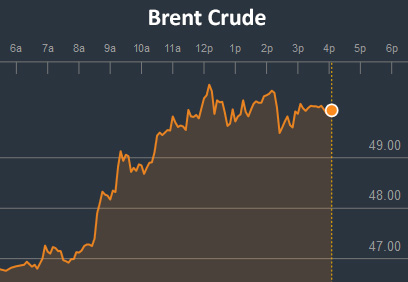 The details are a little unclear, and the Indonesian Oil Minister said “there were still issues to resolve that wouldn’t be easy.” That may be why oil markets took the news more or less in stride. Prices were up a bit, but most traders are probably waiting to see if OPEC can actually make its new agreement stick.