Kurt Eichenwald continues his chronicle of Donald Trump’s business failures today, this time via a report from the New Jersey Department of Law and Public Safety that summarizes Trump’s federal tax returns from the late 70s. The report was based on tax returns furnished to them when Trump first tried to break into the casino business in 1980. This was just after Trump had scored his first big success—the Grand Hyatt hotel in Manhattan—which relied entirely on loans 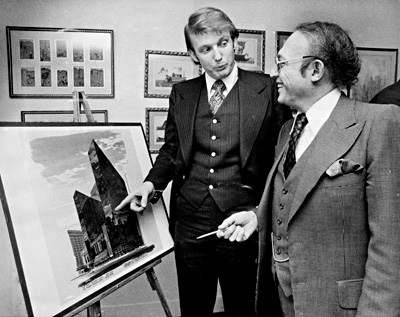 personally guaranteed by Trump’s father. Fred Trump also arranged for Donald to obtain a personal line of credit of $35 million at Chase Manhattan:

….No one could withstand these types of losses given the comparatively paltry amount of money available to offset them. So Trump took the same route he did for the rest of that decade and in decades to come: He borrowed more to keep himself afloat….On September 24, 1980, Fred Trump arranged for a series of loans totaling $7.5 million to his son….That same day, one of the Trump family’s companies, Trump Village Construction Corporation, lent Donald Trump an additional $976,238. All of the loans could be paid back at any time, and Donald Trump was not liable for any of the interest payments on them.

So what kind of businessman is Donald Trump? The truth is that it hasn’t been all bungling and failure—just most of it. There have basically been six eras of Trump:

1970s: The Era of Early Failures. See above. Trump breaks into the Manhattan real estate market but racks up loss after loss. He is bailed out by his father.

Early 1980s: The Era of Success. A chastened Trump apparently decides to buckle down and pay attention to work. It’s during this period that he puts together the parcels and financing for Trump Tower, one of his most successful projects. This is the briefest of the Trump eras.

Mid 80s/early 90s: The Era of Catastrophic Failure. Trump reverts to form. He negotiates terrible deals for a USFL team, the Plaza Hotel, the Eastern Shuttle, and a yacht he never uses. He obsesses over plans to develop a grandiose project he called Television City, located on 57 acres of land along the Hudson River. But he bungles the deal and loses control. He builds casinos in Atlantic City, but epically mismanages them and loses a huge sum. By 1991 he’s broke. He avoids personal bankruptcy partly by 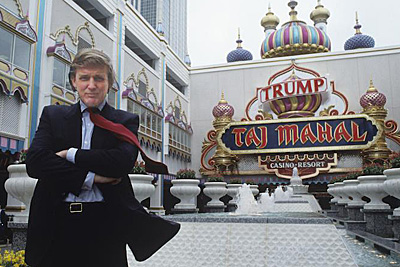 browbeating his bankers and partly by pleading for tens of millions of dollars in loans from his father and his siblings.

Mid/late 90s: The Era of Desolation. Trump finally emerges in 1995, no longer broke but no longer all that rich either. His marriage to Marla Maples is heading south, and ends in divorce in 1999. He keeps up a brave public face, but these are bleak years with nothing much to maintain his interest. Then, in 1999, Trump’s father dies, followed by his mother in 2000. Trump inherits roughly $70 million or so.

2000 and beyond: The Era of Golf and Licensing. Building skyscrapers is now out of reach, since no one will lend Trump the kind of scratch that takes. So he starts overpaying for golf courses instead. Beyond that, he finally finds something he’s good at: making money from his mouth. He licenses his name to naive developers from overseas who still think he’s the king of real estate. He lends his name to a seemingly endless string of penny ante businesses—Trump steaks, Trump vodka, Trump radio—as well as a dodgy assortment of penny-ante scams—Trump University, Trump diets, Trump mortgages. In 2004, he hits the jackpot of random luck when reality king Mark Burnett chooses him to host The Apprentice, a show perfectly suited to Trump’s talents for bullying and bombast.

2015-16: The Era of Making America Great Again. You all know this part of the story, right?

It’s kind of sad, really: Donald Trump has lived his entire life in the shadow of his father’s success. Everything he’s done has been one long, desperate attempt to prove to himself and the world that he’s as successful as Fred Trump—who really was a self-made man. He never found that success, though, and running for president is his final, most audacious attempt to win his father’s respect. Unfortunately, like all the others, it’s doomed to failure—and not just because he’s likely to lose in November. His problem runs much deeper than that. He’s never looked in the right place.