The Washington Post writes today that the Hillary Clinton email story is “out of control”:

Judging by the amount of time NBC’s Matt Lauer spent pressing Hillary Clinton on her emails during Wednesday’s national security presidential forum, one would think that her homebrew server was one of the most important issues facing the country this election. It is not.

…Ironically, even as the email issue consumed so much precious airtime, several pieces of news reported Wednesday should have taken some steam out of the story. First is a memo FBI Director James B. Comey sent to his staff…Second is the emergence of an email exchange between Ms. Clinton and former secretary of state Colin Powell…Last is a finding that 30 Benghazi-related emails that were recovered during the FBI email investigation and recently attracted big headlines had nothing significant in them…The story has vastly exceeded the boundaries of the facts.

Imagine how history would judge today’s Americans if, looking back at this election, the record showed that voters empowered a dangerous man because of…a minor email scandal. There is no equivalence between 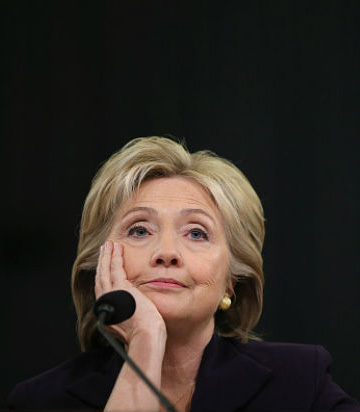 I’m not quite sure how to take this. On the one hand, hasn’t the Washington Post hyped the email story as much as anybody? On the other hand, even if they have, they still deserve credit for seeing the light.

The email story is one of the hardest kinds of stories for the press to handle appropriately. At the beginning of a story like this, it’s impossible to know if there’s something to it. Then the facts drip out slowly over the course of months as everyone chases leads. At some point it becomes clear that there’s no there there, but reasonable people can disagree on when that point is. Personally, I’d date it from sometime between October last year, when Trey Gowdy’s committee was unable to find anything even marginally corrupt during an 11-hour inquisition of Clinton, and July this year, when FBI Director James Comey made it clear that she had done nothing remotely serious enough to warrant prosecution.

But that’s it. Since at least July we’ve basically known the contours of the entire affair. Clinton was foolish to use a single email account hosted on a personal server—which she’s acknowledged—but that’s it. Beyond that, it was an unclassified system and everyone treated it like one. The retroactively classified emails are more a spat between State and the intelligence community than anything else. Nor is there any evidence that Clinton was trying to evade FOIA by hosting her email on a private server. That would have been (a) deliberate and calculating deception on a Nixonian scale; (b) phenomenally stupid since nearly all of her emails were sent to state.gov addresses and were therefore accessible anyway; and (c) unusually half-assed since she retained the emails for years after she left office and turned them over as soon as State asked for them. Only an idiot would try to evade FOIA like this, and even her bitterest enemies don’t think Hillary Clinton is an idiot.

Emailgate has been investigated and reported to death. Unless some genuine bombshell drops, further leaks should be treated as obvious partisan attacks, not news, and further production of emails should be noted briefly on page A17. Let’s not turn this into another Whitewater.

And with that out of the way, can we now move on to the Clinton Foundation? It’s been investigated to death as well, and the only thing we’ve learned is that Doug Band needs to shut his pie hole a little more often. Aside from that, literally every shred of evidence points to (a) appropriate behavior from Hillary Clinton and her staff; (b) Bill Clinton leveraging his fame to raise money for charity; and (c) billions of dollars spent on worthy causes. Beyond that, you might find Bill’s personal moneymaking enterprises a little off-putting, but that’s all. So how about if we give the Foundation a rest too?