TRUMP: Now, whether or not in a place like Chicago you do stop and frisk, which worked very well, Mayor Giuliani is here, worked very well in New York. It brought the crime rate way down.

….HOLT: I do want to follow up. Stop-and-frisk was ruled unconstitutional in New York, because it largely singled out black and Hispanic young men.

TRUMP: No, you’re wrong. It went before a judge, who was a very against-police judge. It was taken away from her. And our mayor, our new mayor, refused to go forward with the case. They would have won an appeal. If you look at it, throughout the country, there are many places where it’s allowed.

Trump said four things here, and typically for him, he was effectively wrong about all four.

First off, he implied that Rudy Giuliani brought stop-and-frisk to New York City. He didn’t. As you can see in the chart on the right, the stop-and-frisk rate didn’t start rising until 2002, when Michael Bloomberg was 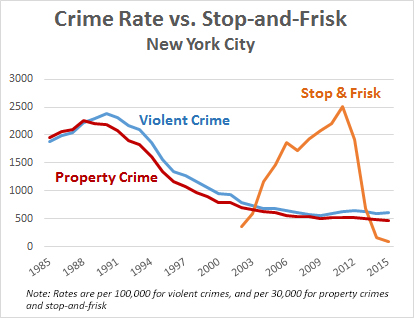 Second, he said it brought the crime rate “way down.” Again, the chart on the right doesn’t bear this out. Crime rates were already on a steady, long-term downward trend by 2002, and the increase in stop-and-frisk doesn’t seem to have changed that much. A more detailed analysis concluded that stop-and-frisk actually did have a modest effect, “but only the increase in stops made based on probable cause indicators of criminal behaviors were associated with crime reductions.” Save that thought, and we’ll come back to it later.

Third, New York’s version of stop-and-frisk was ruled unconstitutional. Would that ruling have survived on appeal? Probably, but nobody knows, certainly not Donald Trump.

And fourth, there are, in fact, many places where stop-and-frisk is allowed. In fact, it’s allowed everywhere in the country. So why do I count Trump as being wrong about this?

Simple: Stop-and-frisk has been a standard police procedure for decades, but the Supreme Court ruled in 1968 that it’s only legal if it’s based on a reasonable suspicion of criminal activity. The problem in New York City is that stop-and-frisk became a routine tool used even when there was essentially no justification at all. This is the stop-and-frisk policy that Trump was talking about, and it’s decidedly not used in “many places.” It was unique to New York City.

This is why the study I linked above is important. It concluded that stop-and-search based on probable cause did help reduce crime. But the New York City version didn’t. And it did target blacks and Latinos at much higher rates than whites, even after you account for disparate crime rates. So not only was it unconstitutional, but it didn’t work either. On multiple levels, New York City is better off returning to the legal version.