I come bearing good news. But first, we have to get a little technical. I promise it won’t hurt a bit.

Many corporations are “pass-through” entities. Mostly these are partnerships and small businesses, and they aren’t taxed on their profits. Instead, the profits are passed through to the business owners, who pay ordinary personal income tax on it. Donald Trump, for example, owns hundreds of separate 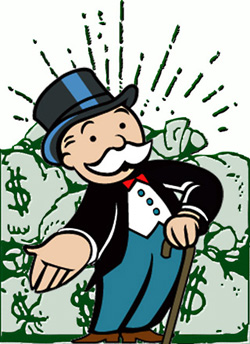 businesses under the umbrella of the Trump Organization, and most of them are pass-throughs. All the profits go to Trump.

So how should these businesses be handled? In the tax proposal Trump unveiled last year, pass-throughs would be taxed at a low 15 percent rate. This is a huge tax cut for rich business owners—like Donald Trump—since their personal tax rate can be as high as 33 percent. A corporate rate of 15 percent combined with a zero percent personal rate represents a huge tax cut.

But that was then. Earlier this week Trump unveiled a shiny new tax plan. How does it handle pass-throughs? As usual, details are hard to come by in Trumpland, but he told the Tax Foundation that he had decided to eliminate the tax cut. They took him at his word and concluded that his new tax plan would cost $4.4 trillion.

But Trump told the National Federation of Independent Business that he was keeping the tax cut. They also took him at his word and gave him their support. So which is it? Binyamin Appelbaum investigates:

Call it the trillion-dollar lie: Both assertions cannot be true.

….Steven Mnuchin, Mr. Trump’s finance chairman, said Friday that the campaign’s tax plan had not changed at any point on Thursday….“The intent of the plan is that big and small businesses have tax relief,” he said. He declined to comment on the conflicting accounts provided by the two groups.

So what’s the good news in all this? Here it is: Appelbaum called it a lie. That may be a bit rude, but it’s the most accurate way of characterizing what happened. Trump has been working on this plan for months and clearly has some idea of exactly how he plans to handle pass-through businesses. But he told business owners one thing and a tax scoring group another. What else would you call this?