Speaking of Hillary Clinton’s emails, we learned something interesting today. But first, here’s an excerpt from the FBI report that was released last month. Apologies for the length, but it’s important that you see the whole thing so you know I haven’t left out any relevant parts: 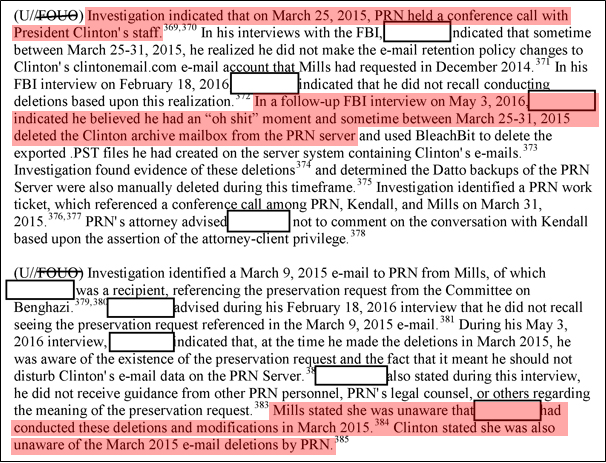 Here’s the full timeline in a nutshell:

December 2014: After turning over Clinton’s work emails to the State Department, Clinton’s staff instructed Platte River Networks to delete her old email files, which included all her private emails. The tech assigned to this task forgot to do it.

March 25: Clinton’s staff has a conference call with PRN.

March 25-31: The tech has a “holy shit” moment and remembers he never deleted the old archives. So he does. Both Clinton and Cheryl Mills say they were unaware of these deletions.

This timeline is a bit of a Rorschach test. If you already think Hillary Clinton is a liar and a crook, your reaction is: Give me a break. They just happened to have a conference call on March 25 and the tech just happened to delete the archives a few days later? But the Clinton gang says they never told him to do this? Spare me.

However, if you’re sympathetic to Clinton, this all seems pretty unremarkable. Her staff had ordered the archives deleted in 2014, long before any subpoenas were issued, and it was only because of the tech’s forgetfulness that they were still around in March. The tech was telling the truth when he said that no one told him to delete the archives in March. The conference call just jogged his memory. And Clinton and Mills really didn’t have any idea what was going on. After all, it would have been wildly dangerous to explicitly tell PRN on a conference call to delete archives that were under a legal preservation order.

So which is it? The answer is that we don’t know. You can read this timeline however you want. Today, however, we got this:

FBI Director James Comey said Tuesday his investigators looked very intently at whether there was obstruction of justice in the investigation into Hillary Clinton’s email account, but concluded they could not prove a criminal case against anyone.

“We looked at it very hard to see if there was criminal obstruction of justice,” Comey said at a Senate Homeland Security Committee hearing, under questioning by Chairman Sen. Ron Johnson (R-Wis.)

“We looked at it very hard. We could not make an obstruction case against any of the subjects we looked at,” Comey said. He did not identify those whose conduct the FBI investigated for potential obstruction.

What Comey is saying is that the FBI put a lot of effort into discovering the truth about what happened in March, including grants of immunity to several people so they could tell the truth without fear of prosecution. But they came up empty. Despite their best efforts, it appears that Clinton’s staff did nothing wrong. The PRN tech just had a memory lapse about the deletion order and then did a dumb thing when he remembered it.

Hillary Clinton made a mistake when she decided to use a single email account on a personal server while she was Secretary of State. But it was just a mistake, not a criminal conspiracy. Once again, there’s no there there.