I’ve been genuinely confused about the whole Foundationgate thing. Did big donors to the Clinton Foundation get extra special access to Hillary Clinton when she was Secretary of State? By all the evidence, no. They may have tried to get access, but for the most part they didn’t. So far I haven’t seen any emails that even remotely suggest otherwise. If anything, Hillary seems to have been unusually careful to avoid entanglements with the Foundation.

So what’s the problem? I chatted about this on Twitter last night with Rick Hasen, a guy I trust on these kinds of things. But I still came away confused. So here is 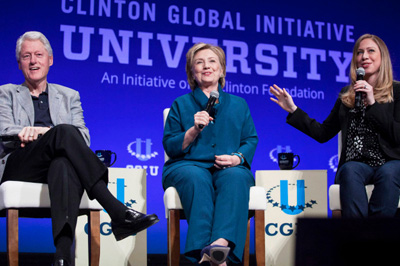 Hasen at greater length this morning in USA Today. After talking a bit about Donald Trump, he turns to Hillary:

And now revelations from the latest batch of State Department emails released through actions of the group Judicial Watch show that the largest donors to the Clinton Foundation had easy access to Clinton’s inner circle. S. Daniel Abraham, for example, the billionaire behind the Slim Fast diet and a Clinton fundraising bundler, got eight meetings with Clinton while she was secretary of State to discuss Middle East issues he cared about. An AP analysis found that at least 85 people who met with Clinton at the State Department were donors or connected to donors.

None of these things — Trump courting super PAC donors, Clinton getting paid by the wealthiest companies as a private citizen, or Clinton as secretary of State giving access to big donors to her foundation — amounts to criminal activity or even what we might term corruption. In the Supreme Court’s Citizens United case, Justice Anthony Kennedy, writing for the Court, declared that “ingratiation and access are not corruption.”

But there’s still something wrong with a political system in which access goes to the highest bidder. The Clinton team is quick to argue that there’s no evidence the meetings Clinton gave to big donors led to any official actions. But those donors get more than just a picture with a candidate; they get a chance to make their pitch for the policies they want pursued or blocked, a pitch the rest of us don’t get to make because we don’t have hundreds of thousands of dollars or more to contribute to campaigns.

This is fine. If the beef with Hillary is that she’s an ordinary politician who’s more likely to see you if you’re (a) important, (b) a party wheelhorse, and (c) an important donor, then I have no argument. I also have no argument that this is unseemly.

So here are several possible takes on Hillary:

I’ve simply seen no evidence of #3, and that includes the AP’s strained effort yesterday. Besides, if this were truly well known, by now someone would have come forward to spill the beans.