I will happily concede that poking holes in Donald Trump’s tax “policy” is just an idle way to pass the time, like doing a crossword puzzle or watching a Division III football game. Still, it occasionally pays off in entertainment value.

You all know that Trump’s economic plan, unveiled yesterday, is basically a huge giveaway to the rich. However, from the very beginning of his campaign, Trump has been consistent about abolishing the carried-interest loophole, which allows hedge fund managers to pay low tax rates on their management fees, which can sometimes run into the billions of dollars. This is the 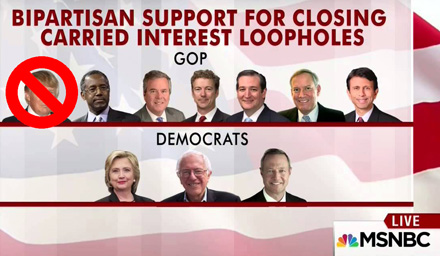 entire basis of his claim that the rich will pay more under his plan.

But it turns out that he’s found a clever way to stick with his promise but nonetheless give the hedge fundies a huge tax cut. CBPP explains:

Mr. Trump said today that he would set the top individual income-tax rate at 33 percent…However, his plan would create a much lower rate than 33 percent for a substantial number of very-high-income households by allowing people to pay a new low rate of 15 percent on “pass-through” income (business income claimed on individual tax returns).

….This large tax cut for pass-through income would also undercut another tax change Mr. Trump mentioned today: eliminating the tax break for “carried interest.” Under current law, investment fund managers can pay taxes on a large part of their income — their “carried interest,” or the right to a share of their fund’s profits — at the 23.8 percent top capital gains tax rate rather than at normal income tax rates of up to 39.6 percent. The Trump plan ostensibly would tax carried interest at ordinary income tax rates. In fact, however, these investment fund managers generally would be able to arrange to receive their income as pass-through income.

Nickel summary: Under the old plan, the tax rate for carried interest would go up from 23.8 percent to 33 percent (or whatever top rate Trump happens to be hawking at any given moment). Under the shiny new plan, it would go down from 23.8 percent to 15 percent. The carried interest loophole would be gone, but the new pass-through income rate would be even better. Hooray for Wall Street!

This is basically a trivial thing, but it just goes to show how fanatic Republicans are about cutting taxes on the rich. Even a small symbolic tax increase that would affect only a tiny number of rich people simply can’t be tolerated. Some way has to be found to get rid of it, even if that means inventing a whole new tax giveaway for a huge number of people.

Actually, I suppose that’s a feature, not a bug. Silly me.