The California legislature has passed a bill that would increase the penalties for raping an unconscious victim. Eric Levitz applauds the motivation for the bill, but takes issue with the overall message it sends. You should really read the whole thing, but here’s an excerpt: 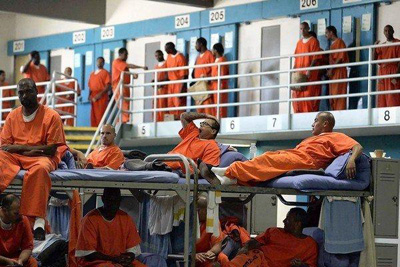 ….The primary reason for America’s exceptional incarceration rate is that its voters are more comfortable with condemning their fellow citizens to cages for long periods of time than are those in other democracies….The most harmful thing about California’s bill may be the way it encourages this culture of incarceration.

If one focuses narrowly on the law’s immediate effects, a reasonable case can be made for its virtues: A three-year minimum sentence for raping an unconscious person is not wildly out of step with global standards….And, anyway, California’s bill contains a provision allowing judges to exercise discretion in “unusual cases where the interests of justice would best be served if the person is granted probation.”

On the other hand, it is unlikely that many judges would take on the political liability of exercising such discretion. And the specter of a minimum three-year jail sentence has the potential to intimidate innocent defendants into plea agreements — a phenomena that is more likely to disadvantage the most-vulnerable members of our society, who can least afford to mount a compelling defense.

….Nonetheless, the problem with California’s law lies less in its immediate, legal implications than in its cultural and political ones. To end mass incarceration, progressives will need to persuade their fellow citizens that we can reduce penalties for violent crime without reducing our concern for its victims….In calling for Judge Persky’s repeal, the movement fostered social and political stigma against the exercise of judicial leniency. People who look like Brock Turner will not be the ones most affected by such stigmas.

….If there were strong evidence that longer prison sentences make a critical difference in deterring violent crime, then California’s law might still be worthwhile. But there isn’t. According to the 2014 findings of the National Research Council, applying a mandatory minimum to a given offense does not reduce its prevalence.

Progressives have recently taken the position that America operates a prison-industrial complex that vastly oversentences its millions of victims. This cruel and unfair system needs to be dialed way back—unless the crime in question happens to be one that progressives are especially concerned about. In those cases, we should show no mercy.

There’s nothing logically contradictory about this. It’s possible that we do vastly oversentence for most crimes but undersentence a few particular crimes. Nonetheless, this is something more people should stop to ponder. Do we believe that locking up criminals for long periods of time is an effective deterrent, or don’t we? Do we believe in mandatory minimums, or don’t we? If we don’t, why are certain crimes an exception?