In a new paper using an interesting approach, Roland Fryer finds that police officers treat blacks and Hispanics more roughly than whites, but they don’t shoot them any more frequently:

The results obtained using these data are informative and, in some cases, startling. Using data on NYC’s Stop and Frisk program, we demonstrate that on non-lethal uses of force—putting hands on civilians (which includes slapping or grabbing) or 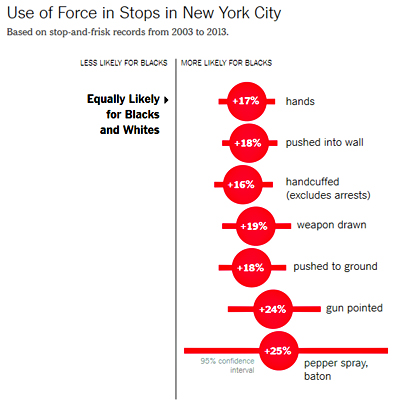 pushing individuals into a wall or onto the ground, there are large racial differences. In the raw data, blacks and Hispanics are more than fifty percent more likely to have an interaction with police which involves any use of force.

In stark contrast to non-lethal uses of force, we find no racial differences in officer-involved shootings on either the extensive or intensive margins. Using data from Houston, Texas—where we have both officer-involved shootings and a randomly chosen set of potential interactions with police where lethal force may have been justified—we find, in the raw data, that blacks are 23.8 percent less likely to be shot at by police relative to whites. Hispanics are 8.5 percent less likely.

Analyzing data from cities in California, Texas, and Florida, Fryer found that lethal force was used more often against whites than blacks.1This is from the New York Times:

In officer-involved shootings in these cities, officers were more likely to fire their weapons without having first been attacked when the suspects were white. Black and white civilians involved in police shootings were equally likely to have been carrying a weapon. Both of these results undercut the idea that the police wield lethal force with racial bias.

…A more fundamental question still remained: In the tense moments when a shooting may occur, are police officers more likely to fire if the suspect is black?

To answer this question, Mr. Fryer focused on one city, Houston. The Police Department there allowed the researchers to look at reports not only for shootings but also for arrests when lethal force might have been justified. Mr. Fryer defined this group to include suspects the police charged with serious offenses like attempting to murder an officer, or evading or resisting arrest. He also considered suspects shocked with Tasers.

And in the arena of “shoot” or “don’t shoot,” Mr. Fryer found that, in tense situations, officers in Houston were about 20 percent less likely to shoot a suspect if the suspect was black. This estimate was not very precise, and firmer conclusions would require more data. But, in a variety of models that controlled for different factors and used different definitions of tense situations, Mr. Fryer found that blacks were either less likely to be shot or there was no difference between blacks and whites.

Fryer calls this “the most surprising result of my career.” Needless to say, it’s based on limited data (the city of Houston) and a new way of looking at police shootings, so Fryer’s results should be considered tentative. And it’s worth keeping in mind that lesser uses of force are far more common in encounters with blacks than whites:

“Who the hell wants to have a police officer put their hand on them or yell and scream at them? It’s an awful experience,” he said. “I’ve had it multiple, multiple times. Every black man I know has had this experience. Every one of them. It is hard to believe that the world is your oyster if the police can rough you up without punishment. And when I talked to minority youth, almost every single one of them mentions lower level uses of force as the reason why they believe the world is corrupt.”

Food for thought. Fryer is a careful and highly respected researcher, and he was motivated to conduct this study by the events in Ferguson a couple of years ago. Both of his conclusions are worth taking seriously and warrant further study.

1The results weren’t statistically significant, so technically Fryer’s conclusion is that there’s no difference between the shooting rate of whites and blacks.