Rick Hasen reports on an appellate court decision rejecting North Carolina’s horrible 2013 voting law. Most importantly, they rejected it by clearly finding discriminatory intent on the part of the legislature:

A partially divided panel of 4th Circuit judges reversed a massive trial court opinion which had rejected a number of constitutional and Voting Rights Act challenges to North Carolina’s strict voting law, a law I had said was the largest collection of voting rollbacks contained in a single law that I 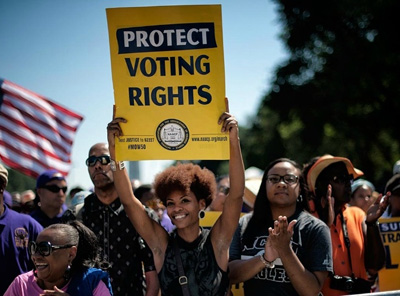 could find since the 1965 passage of the Voting Rights Act….This decision is the third voting rights win in two weeks.

….The 4th Circuit goes out of its way to commend the trial court for its carefulness and thoroughness (something I noted in my own analysis). But “In holding that the legislature did not enact the challenged provisions with discriminatory intent, the court seems to have missed the forest in carefully surveying the many trees….Although the new provisions target African Americans with almost surgical precision, they constitute inapt remedies for the problems assertedly justifying them and, in fact, impose cures for problems that did not exist. Thus the asserted justifications cannot and do not conceal the State’s true motivation.”

In previous cases like this, we’ve seen courts uphold restrictive voting laws on the grounds that they’re partisan, not racist. If Republicans want to try to restrict likely Democrats from voting, that’s OK. Alternatively, if you can’t show any outright racial animus, then the law isn’t discriminatory. The court rejected both arguments:

Later there is this key part: “Our conclusion does not mean, and we do not suggest, that any member of the General Assembly harbored racial hatred or animosity toward any minority group. But the totality of the circumstances…­cumulatively and unmistakably reveal that the General Assembly used SL 2013-381 to entrench itself….Even if done for partisan ends, that constituted racial discrimination.”

….Here is the key language on why the 4th Circuit found the district court clearly erroneous on the intent question: “The district court failed to take into account these cases and their important takeaway: that state officials continued in their efforts to restrict or dilute African American voting strength well after 1980 and up to the present day….These cases also highlight the manner in which race and party are inexorably linked in North Carolina….The district court failed to recognize this linkage, leading it to accept ‘politics as usual; as a justification for many of the changes in SL 2013-381. But that cannot be accepted where politics as usual translates into race-based discrimination.”

This is tentatively good news. “Tentative” because I assume the next step is the Supreme Court. Will they uphold the 4th Circuit’s decision to strike down North Carolina’s law, or will they ignore the obvious and pretend that this is, indeed, just politics as usual?