Brexit has passed, and now it’s time to find someone to blame. Sure, you can go with the pack and blame David Cameron or Nigel Farage, but that’s not much fun. Here are four plausible but not entirely obvious choices:

In order to keep peace within his own party, Prime Minister David Cameron promised a vote on Brexit in 2013. It seemed fairly harmless at the time: Cameron’s Conservative Party was about 20 seats short of an outright majority in Parliament, so he was governing in a coalition with the Liberal Democrats. The Lib Dems opposed the referendum, and as long as they remained in the coalition, there would most likely have been 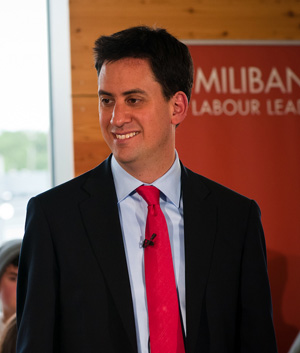 no vote. To maintain this status quo, neither the Lib Dems nor the opposition Labor Party even had to gain any seats in the 2015 election. They just had to hold their own.

But Ed Miliband proved to be such a hapless leader of the Labor Party that he lost 26 seats in the election. This was just enough to give the Tories a bare majority, and that paved the way for Brexit.

Alternatively, you could blame Lib Dem leader Nick Clegg, who managed his party’s coalition with Cameron poorly and lost an astounding 49 of its 57 seats in the 2015 election. But Labor was the primary opposition party and should have been able to pick up most of those seats, so let’s stick with Miliband on this one.

For all the praise she gets, Angela Merkel has been one of the most disastrous European leaders in my lifetime. She’s as responsible for Brexit as anyone I can think of, thanks to two catastrophic decisions she made.

The first was her insistence on punishing Greece following its collapse after the Great Recession. There’s plenty of blame to go around on all sides for the Greece debacle, but as the continent’s economic leader Germany held most of the high cards during negotiations over Greece’s fate. Merkel had a choice: (a) punish Greece for running up 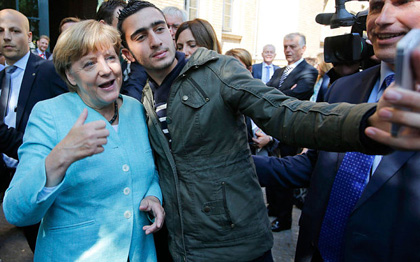 unsustainable debts and lying about them, or (b) accept that Germany bore much of the blame itself for the crisis and that Greece had no way of rescuing itself thanks to the straitjacket of the common currency. The former was a crowd pleaser. The latter was unpopular and would have required sustained, iron-spined leadership. In the event, Merkel chose to play to the crowds, and Greece has been a basket case ever since—with no end in sight. It hardly went unnoticed in Britain how Europe treated a country that was too entangled with the EU to either fight back or exit, and it made Britain’s decision to forego the common currency look prescient. And if that had been a good choice, maybe all the rest of “ever closer union” wasn’t such a great idea either.

Merkel’s second bad decision was more recent. Here is David Frum: “If any one person drove the United Kingdom out of the European Union, it was Angela Merkel, and her impulsive solo decision in the summer of 2015 to throw open Germany—and then all Europe—to 1.1 million Middle Eastern and North African migrants, with uncountable millions more to come.” It’s hard to fault Merkel for this on a humanitarian basis, but on a political basis it was a disaster. The barely-controlled wave of refugees Merkel encouraged has caused resentment and more all over Europe, and it unquestionably played a big 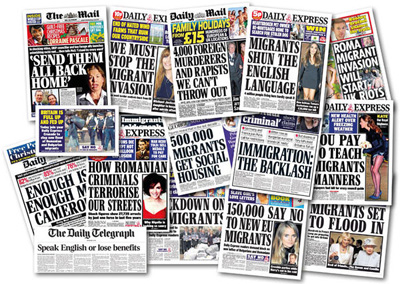 role in the immigrant backlash in Britain that powered the Leave vote.

Paul Dacre is the longtime editor of the Daily Mail, and he’s standing in here for the entire conservative tabloid press, which has spent decades lying about the EU and scaring the hell out of its readership about every grisly murder ever committed by an immigrant. In a journalistic style pioneered by Boris Johnson—who we’ll get to next—the Mail and other tabloids have run hundreds of sensational stories about allegedly idiotic EU regulations and how they’re destroying not just Britain’s way of life, but its very sovereignty as well. These stories range from deliberately exaggerated to outright false, and they’re so relentless that the EU has an entire website dedicated to debunking British tabloid myths from A (abattoirs) to Z (zoos). The chart below, from the Economist, tots up all the lies, and the Mail is the clear leader. 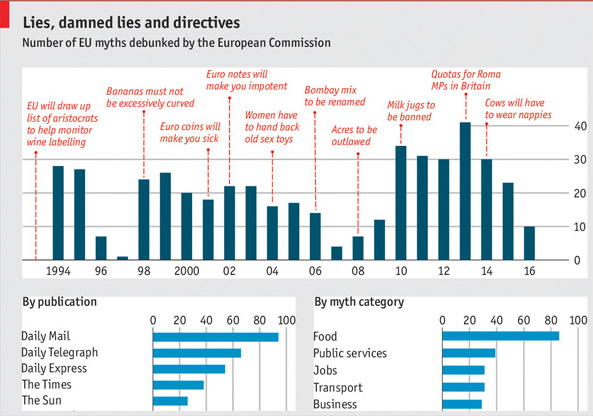 The EU is hardly a finely-tuned watch when it comes to regulations, but the vast majority of the outrage over its rulings is based almost literally on nothing. Nonetheless, the outrage is real, and it was fueled largely by Dacre’s Daily Mail and its fellow tabloids.

Why Boris? After all, it was Nigel Farage, the odious leader of the openly xenophobic UKIP party, who led the charge to leave the EU. This is, perhaps, a judgment call, but I’ve long had a stronger disgust for those who tolerate racism than for the open racists themselves. The latter are always going to be around, and sometimes I even have a little sympathy for them. They’ve often spent their entire lives marinating in racist communities and are as much a victim of their upbringing as any of us.

But then there are those who should know better, and Boris Johnson is very much one of them. The usual caveat is in order here: I can’t look into Johnson’s heart and know what he really thinks. But he’s had a long journalistic career, 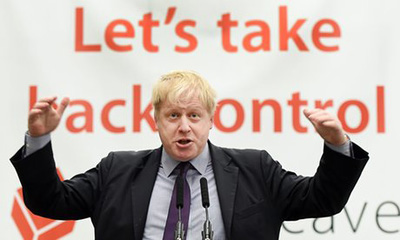 and an equally long history of tolerating racist sentiments. As a longtime Euroskeptic—though probably more an opportunistic one rather than a true believer—it’s no surprise that he campaigned for Brexit, but in doing so he knowingly joined hands with Farage and his UKIP zealots, providing them with a respectability they wouldn’t have had without him. He knew perfectly well that the Leave campaign would be based primarily on exploiting fear of immigrants, but he joined up anyway.

Johnson is hardly the only British politician to act this way, of course. But he’s the most prominent one, so he gets to stand in for all of them.