A while back I asked how to handle the fire hose of Donald Trump news, and one suggestion was to ignore it during the day and then put all of it into a single end-of-the-day roundup. I’m not sure this is a viable long-term solution, but let’s give it a 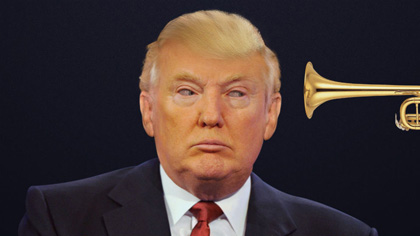 Publicly, Trump has made it clear that he thinks global warming is a hoax. But when it comes to building a sea wall to protect one of his golf courses, it turns out he’s a true believer: “If the predictions of an increase in sea level rise as a result of global warming prove correct,” his company says in a letter, “it could reasonably be expected that the rate of sea level rise might become twice of that presently occurring….As a result, we would expect the rate of dune recession to increase.”

Trump apparently isn’t quite as plugged into the world of the rich and powerful as he thinks:

If there were any prevailing doubts of his stature on Wall Street, Mr. Trump said the chief executive at Deutsche Bank could easily allay it. “Why don’t you call the head of Deutsche Bank? Her name is Rosemary Vrablic,” he said in the recent interview. “She is the boss.”

Ms. Vrablic is a private wealth manager at Deutsche Bank in New York. She is not the company’s chief executive; John Cryan holds that role. Both declined to comment on Mr. Trump.

Trump recently met with Robert Murray, CEO of Murray Energy, and had a question for him:

During the meeting, Murray said Trump had asked him about numerous facets of U.S. energy policy. At one point, Murray said he would suggest lifting obstacles to opening liquefied natural gas, or LNG, export facilities to reduce the supply glut of natural gas in the country.

He said that Trump was agreeable with the idea, but then had a question. “What’s LNG?” Murray said Trump asked.

Josh Marshall says that if Trump is going to dredge up groundless old rape accusations against Bill Clinton, it’s time to ask him some questions about his own past sexual conduct:

Trump’s former wife Ivana said Trump raped her in a sworn deposition. Given how central a role rape accusations have played in Trump’s campaign — against Mexicans, political opponents, etc. it is clearly a highly germane question, as frankly it would be for any presidential candidate.

The details surrounding the alleged rape are bizarrely novelistic even by Trumpian standards. According to Ivana, Trump was driven to freakish rage by a failed anti-baldness surgery — a so-called ‘scalp reduction’. But the actions are very clear cut. According to her deposition, Trump flew into a rage, attacked her, held her down and began pulling hair out of her head to mimic his pain and then forcibly penetrated her….This was a pretty concrete and specific [accusation]. And the author of the book that first surfaced the deposition said he’d found numerous friends of Ivana’s who she had confided the incident to at the time.

The right-wing fever swamp has long believed that Vince Foster, a deputy White House counsel in the Clinton administration, didn’t commit suicide on July 20, 1993. Rather, Hillary Clinton had him murdered and then ordered his body dragged to Fort Marcy Park, where he was found the next day. Even by conservative standards this is both fantastical and repulsive (Foster was a good friend of Hillary’s). Naturally, that didn’t stop Trump:

When asked in an interview last week about the Foster case, Trump dealt with it as he has with many edgy topics — raising doubts about the official version of events even as he says he does not plan to talk about it on the campaign trail. He called theories of possible foul play “very serious” and the circumstances of Foster’s death “very fishy.”

“He had intimate knowledge of what was going on,” Trump said, speaking of Foster’s relationship with the Clintons at the time. “He knew everything that was going on, and then all of a sudden he committed suicide.” He added, “I don’t bring [Foster’s death] up because I don’t know enough to really discuss it. I will say there are people who continue to bring it up because they think it was absolutely a murder. I don’t do that because I don’t think it’s fair.”

There was also some polling news, but who cares about polls in May?