Sam Wang, my go-to presidential forecaster, says Hillary Clinton would have a 99 percent chance of winning if the election were held today. But the election isn’t being held today:

Historically from 1952 to 2012, the likely range of movement in two-candidate margin from this time until Election Day has been 10 percentage points, which is the standard deviation from the 16 past elections. Therefore, even though Clinton currently leads by a median margin of 7 percent (12 national surveys) and would certainly win an election held today, she could still lose the lead, and from a purely poll-based standpoint, is only narrowly favored to be elected President in November (probability: 70%).

It is also the case that Clinton is the only candidate who is poised for a blowout. Her “plus-one-sigma” outcome (current polls plus one standard deviation) is a popular vote win of 58.5%-41.5%. Trump’s plus-one-sigma outcome is a narrower win, 51.5%-48.5%.

In chart form it looks something like this: two bell curves centered 7 points away from each other, each with a standard deviation of 10 points. 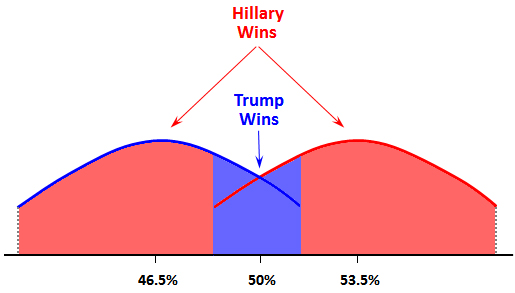 The blue span from 48.5 to 51.5 is Trump’s 30 percent chance of winning—though it’s worth noting that Wang says the standard deviation in recent elections has been more like 4 points, which would give Trump virtually no chance of winning. Nonetheless, he also says this: “But considering the upheaval in the Republican Party, a little voice tells me to open my mind to a wider range of possibilities… including a Trump win.”

James Wimberley isn’t convinced. He takes a look at various upsides and downsides of the two candidates (gaffes, oppo dumps, unusual outside events, etc.) and concludes that virtually all of them favor Hillary:

Adding these pseudo-numbers up, I get the total risks to Clinton 39, to Trump 352. Really the only more than marginally possible future events in my categories that he has going for him are ISIS pulling off a big atrocity and economic collapse in China, both at long odds. I don’t claim credibility for my particular numbers, just that overall we have to put a very fat thumb on the probability scales in Clinton’s favour. So her chances to a sensible bettor are more than Wang’s 70%, a lot more.

Comments? I’m pretty astounded that after locking up the nomination Trump has actually gotten more out of control, not more restrained. Everybody sort of assumed that when it came time to widen his appeal beyond the Republican base, he’d be smart enough to dial things back a notch, but he seems to have taken this as some kind of schoolyard challenge. The last couple of weeks he’s been crazier than ever. If this keeps up, I’d be hard put to give him more than a 1 percent chance of winning.