Are pro-business reforms good for economic growth? You’d think so, but the evidence is actually unclear. So Evan Soltas tried a different approach to the question: taking a look at countries that had big, sustained jumps in the World Bank’s Doing Business Index:

This is, I think, a reasonable way of doing things: Even if you are distrustful of the index, as am I, if the World Bank says that your country is in the top 5 percent of reformers in some year, there’s probably something to that. In my sample, it took at least a 10-point increase in the ease of starting a business to qualify as a “reform” year. That is like going from India to China.

A bit of Greek-letter math later, he has an equation that links per-capita GDP growth with the World Bank index:

What I find is that neither term has a significant coefficient. In fact, I can bound the effect of pro-business reforms quite precisely around zero, with a 95-percent confidence interval for the effect of a 10-point reform on the level of per-capita output of -1.4 percent to 3.5 percent. That is far away from the claim that such a reform could double per-capita output.

Now, this isn’t nothing. The reforms led to an increase in economic growth of about 1 percent. And especially in poor countries, there may be other compelling reasons to adopt pro-business reforms. But if Soltas is right, the economic benefits are modest.

Sadly, Soltas did not put this in colorful chart format, which he needs to do if he expects to meet the expectations of his fans. But the bottom line is simple: the United States is already one of the top performers in business friendliness. Incremental improvements 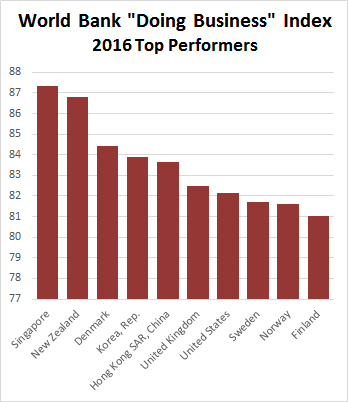 are all that’s left to us, and the impact of these improvements plateaus at high levels anyway. More than likely, pro-business reforms in the US would have little to no effect on economic growth. Here’s Soltas:

Maybe the lesson here is to beware the TED-talk version of development economics. Shortening the time it takes to incorporate a small business is not a substitute for deeper institutional reforms, such as those that support investment in human and physical capital, remove economic barriers that hold back women and ethnic or religious minorities, or improve transportation, power, and sanitation infrastructure. Easy pro-business reforms should not distract countries from pursuing changes that, while harder to make, we know to be richly rewarding in the long run.