Win or lose (hint: he’s going to lose), Bernie Sanders should feel pretty good about his success in pushing Hillary Clinton to the left during the primary campaign. She’s now against the TPP; she definitively favors a large hike in the minimum wage; and she supports expansion of Social Security. These may not seem like huge changes—and they aren’t—but they’re a lot more than most 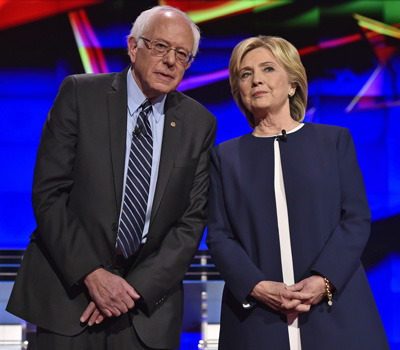 candidates accomplish. Dennis Kucinich ran twice without having any measurable effect at all on the Democratic race.

Now Bernie can take credit for one more move to the left:

“I’m also in favor of what’s called the public option, so that people can buy into Medicare at a certain age,” Mrs. Clinton said on Monday at a campaign event in Virginia. Mr. Sanders calls his single-payer health care plan “Medicare for all.” What Mrs. Clinton proposed was a sort of Medicare for more.

The Medicare program covers Americans once they reach 65. Beneficiaries pay premiums to help cover the cost of their coverage, but the government pays the bulk of the bill. Mrs. Clinton’s suggestion was that perhaps younger Americans, “people 55 or 50 and up,” could voluntarily pay to join the program.

Now, as Nancy LeTourneau points out, this is hardly something new in the Democratic Party firmament:

Back in 2009/10, Medicare buy-in was discussed as part of Obamacare — until Joe Lieberman weighed in. Given Republican obstruction at the time, health reform would not have passed unless every Democrat voted for it. One defection — ala Lieberman — was enough to end its prospects.

An expansion of Medicaid combined with the option of Medicare buy-in is an incremental path towards universal coverage. That is what Democrats (with exceptions like Lieberman — who was actually for it before he was against it) have been working towards for decades.

Be that as it may, this isn’t something Hillary has publicly supported during this year’s campaign. Until now. Why is she doing this? I’d call it a combined Bernie/Trump effect. Bernie has pushed Hillary to the left in order to win the Democratic primary and Trump has shown that it’s surprisingly safe to take a more populist tone even among Republicans. This suggests that Hillary can move a bit to the left without endangering her chances in the general election.

Whatever happens next, I’d say Bernie has been more successful at pushing the mainstream Democratic Party to the left than any insurgent candidate since the early 70s. He may not win the nomination, but that’s not a bad legacy.