A friend of mine sends me an email about Hillary Clinton:

I have two daughters, 28 and 25, who live in NYC and a son, 23, just out of college and soon to move to Washington DC. Last weekend we were with all three in Charlottesville. I brought up the subject of the election and they all three basically said the same thing: Trump is a jackass and they are going to vote for Hillary, but for god’s sake why does she scream and shout at her rallies, etc. 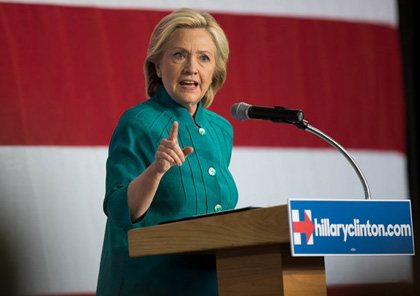 shtick. My oldest says it is now considered a sexist term but, frankly, Hillary comes across as too “shrill.”

Listen, I like Hillary a lot but she has got to stop this shouting bullshit. It comes across as insincere and phony and—as Joe Klein puts it—it’s not necessary in the era of microphones. Hillary is at her most impressive when she just talks like a normal human—remember how she came across in the Benghazi hearings? I am confident that plenty of Hillary’s people read your blog, so please beg them to lean heavily on her to stop the shouting and just talk to people like they aren’t a bunch of deaf morons standing a half-mile away. Obviously Trump has picked up on the resonating significance of this shouting thing and if there is one thing we can agree on it’s that he has a intuitive ear for what gets people riled-up.

I could take the coward’s way out and say that I’m just passing along the observations of another person here, but the truth is that I find Hillary hard to listen to as well. The shouting is one part of it, but the other part (in victory speeches and ordinary stump speeches) is that she never has anything even remotely interesting to say. I know that these kinds of speeches are usually pretty canned affairs, but there’s no reason Hillary can’t mix things up a little bit. Stuff happens in the world all the time, and you can use this stuff as a hook to make your speeches more likely to drive ratings and get better TV coverage.

A lot of people will take this criticism as pure sexism. Maybe some of it is. It’s not as if Bernie Sanders has a carefully modulated tone of voice, and young people seem to like him just fine. Still, fair or not, sexist or not, this is a common observation about Hillary. And it’s hardly impossible to learn how to speak better in public. It just takes a little time and practice. In marketing—and that’s largely what politics is—you don’t complain about lousy customers if they turn out not to like your product or your advertising. The customer is always right, by definition. This is a weak spot for Hillary, and she ought to work on it.

And while we’re on the subject, Team Hillary really, really needs to get over its idiotic obsession with trying to hang a disparaging nickname on Donald Trump. All it does is validate his nicknames and put Hillary in the same gutter he works out of. In the end, that’s not what a majority of the public is likely to want. They want a president, not a game show host.