Jonathan Chait takes aim today at a common conservative story about the rise of the tea party during the Obama era:

That story is that President Obama’s domestic agenda violated the Constitution — perhaps not the actual written text of the Constitution, because then the Republican-appointed majority of the Supreme Court could have stopped him, but certainly the broader spirit of the Constitution, which is about preventing liberals from passing big laws conservatives hate. They were animated by the spirit of what they called “Constitutional conservatism.” This was a new movement that connected abstract beliefs about limited government with the vision of the Founders. Writers like Charles Krauthammer lauded “a popular reaction, identified with the Tea Party but in reality far more widespread, calling for 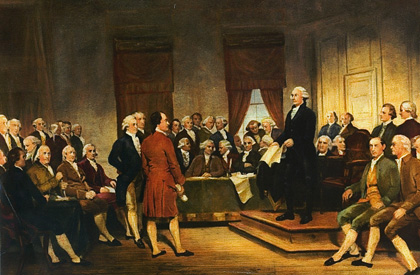 a more restrictive vision of government more consistent with the Founders’ intent.”

I’m not sure if Chait himself is calling this movement new or if he’s attributing this belief to conservatives themselves. The latter, I assume. Either way, though, it bugs me enough to comment on it. Here’s the thing: there’s precisely nothing new about this. It happens—literally—every time a Democrat is president. I wrote about this six years ago, shortly after the birth of the tea party:

When FDR was in office in the 1930s, conservative zealotry coalesced in the Liberty League. When JFK won the presidency in the ’60s, the John Birch Society flourished. When Bill Clinton ended the Reagan Revolution in the ’90s, talk radio erupted with the conspiracy theories of the Arkansas Project. And today, with Barack Obama in the Oval Office, it’s the tea party’s turn.

There are, of course, differences between each of these movements….But these differences are superficial. The similarities are far more telling, and the place they start is a shared preoccupation with the Constitution. The Liberty Leaguers, as Rudolph wrote, spoke of it with “worshipful intensity.” The John Birch Society—which is enjoying a renaissance of sorts today—says of itself, “From its earliest days the John Birch Society has emphasized the importance of the Constitution for securing our freedom.” And as Stephanie Mencimer reported in our May/June issue, study groups dedicated to the Constitution have mushroomed among tea partiers.

….Ever since the 1930s, something very much like the tea party movement has fluoresced every time a Democrat wins the presidency, and the nature of the fluorescence always follows many of the same broad contours: a reverence for the Constitution, a supposedly spontaneous uprising of formerly nonpolitical middle-class activists, a preoccupation with socialism and the expanding tyranny of big government, a bitterness toward an underclass viewed as unwilling to work, and a weakness for outlandish conspiracy theories.

Among the GOP base, as Chait points out, conservative devotion to a distinctive reading of the Constitution is little more than a convenient, pseudo-intellectual justification for the stuff they really care about: cutting “big government” programs that spend tax dollars on people they don’t like. Among GOP elites, it serves the same purpose—though they try to be more careful about letting this slip.