For the past several months, the press—and sadly, I suppose I have to include myself in this—has demonstrated an eager willingness to chatter away about literally anything Donald Trump says. Trump’s MO is pretty simple: say ridiculous stuff, but say it with utter confidence. If any other politician said the kinds of things he said, reporters would take it as obvious—and fairly desperate—spin. 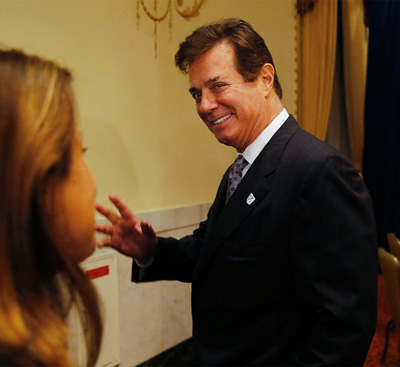 But Trump’s apparently total belief in what he says causes reporters to shed their years of well-earned cynicism and write with an almost wide-eyed fascination.

This is sort of inexplicable. It’s as if campaign reporters have never encountered a top-notch salesman outside the world of politics. Good sales people aren’t slick and oily, folks. They aren’t the ones who sell used cars—that’s for penny-ante sales people. The really good ones go after much bigger game. They speak with total confidence, they appear to believe everything they say, and they have the gift of seeming completely truthful. Trump is one of the best, and he doesn’t try to hide it. He’s written whole books about it. He’s proud of his ability to snooker folks, and he brags about it openly if you ask him.

But no matter. Say it with enough brio and the marks will come running.

This has been obvious for a long time, so why bring it up now? Because apparently Trump has finally trained an acolyte. A few months ago he hired Paul Manafort to run his delegate operation, but that job is no longer necessary now that he’s wrapped up the nomination. So these days Manafort plays some kind of vague role in the Trump campaign that will probably get sorted out eventually when all the current infighting is over. Yesterday he gave an interview to Howard Fineman, and Manafort sounded just like the master himself. It was endless spin delivered with absolute, utter confidence regardless of how ridiculous it was.

And as near as I can tell, Fineman bought it. There’s barely a hint of cynicism, barely a nod to the possibility that Manafort is just delivering garden variety political spin. “Manafort’s sunny vision may be a little skewed,” Fineman says, arousing hope that he does see through Manafort’s charade, but no: “Having made millions as an image crafter for foreign tyrants, he can’t help but see Trump as an easy lift by comparison.” See? The guy’s just calling them as he sees them!

This is all bad enough, but there’s more: as near as I can tell, Fineman’s interview generated as much chatter as an interview with Trump himself—most of it taking Manafort at face value. So now we have two master salesmen who can generate endless chatter just by delivering ordinary spin and making it sound like something more.

I dunno. Maybe I’m overreacting. Maybe this was just a standard bit of beat sweetening, and nothing to get bothered about. But I’m bothered anyway. Trump is a master salesman, and the same reporters who routinely get suckered by Silicon Valley “visionaries” seem to be getting suckered not just by Trump anymore, but by Trump’s minions as well. Where’s the cynicism, folks?