An awful lot of immigration die-hards seem to think that Donald Trump is the one guy they can trust not to go all squishy on them if he wins the election. He’s going to build that wall, dammit! But they might want to rethink that faith in 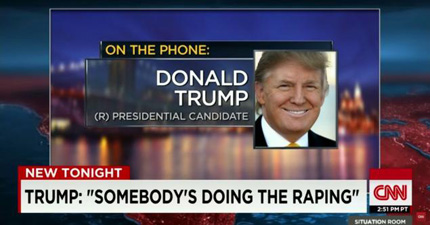 His team at the time consisted of three advisers: Roger Stone, Michael Cohen, and Sam Nunberg….Throughout 2014, the three fed Trump strategy memos and political intelligence. “I listened to thousands of hours of talk radio, and he was getting reports from me,” Nunberg recalled. What those reports said was that the GOP base was frothing over a handful of issues including immigration, Obamacare, and Common Core.

….Which is how Trump’s scorched-earth strategy coalesced. To break out of the pack, he made what appears to be a deliberate decision to be provocative, even outrageous.

Six months later, Lewandowski and Hicks worked into the early hours of the morning prepping for Trump’s campaign announcement in the lobby of Trump Tower….“Nobody said anything,” Trump said about the fact that he had accused Mexico of sending “rapists” over the border into the U.S….He hadn’t tested the line, but Nunberg’s deep dive into talk radio had shown him that this was the sort of thing that would resonate with a certain segment of the Republican base.

Sure, Trump doesn’t employ any pollsters or focus testers. But this sure makes it sound like his thunderous anti-immigrant position is a wee bit less than heartfelt. Maybe even cynically contrived.

It’s a funny thing. I don’t spend a lot of time thinking about the politics of immigration, but if you asked me for a quick read I’d say that any president who tried to push a comprehensive reform plan would meet with the same fate as George Bush in 2007 and Barack Obama in 2013: even if their plan got anywhere in the first place, the Republican base would rebel and kill it. So if you’re a single-issue immigration voter, you can back pretty much anyone. None of them could succeed at passing a plan, and most (all?) of them wouldn’t even bother trying.

Except for one person: Donald Trump. Because the only way that any kind of comprehensive reform could pass is if it’s backed by someone with such a strong, almost cultish following that he can convince the GOP base he’s cut a uniquely good deal. Ted Cruz can’t do it. John Kasich can’t do it. Marco Rubio—who had loads of tea party cred at the time—tried to sway the faithful in 2013, but he couldn’t do it either.

Only Trump could do it. And since he’s badly deluded about his personal negotiating skills, he probably would do it—and he’d be convinced that he really had cut the toughest deal ever on illegal immigration. All the while, Mitch McConnell and Paul Ryan would be snickering behind his back.

Now, it might not happen anyway. Maybe Jeff Sessions would manage to kill it. Or keep Trump from doing the deal in the first place. But that’s a risk you don’t have with any other candidate. Far from being the best candidate of the anti-immigrant faction, I’d say Trump is the worst. He’s the only one who has any plausible chance at all of getting something passed.