Today brings a new academic entry in the angry voter sweepstakes. A quartet of high-powered economists took a look at congressional districts and divided them up by how much they were exposed to trade with China. Some districts showed lots of job losses due to trade while others showed very little. How did voters react?

Districts with lots of job losses were somewhat more likely to vote out incumbents, but not by a lot. Nor were they more likely to switch parties. However, 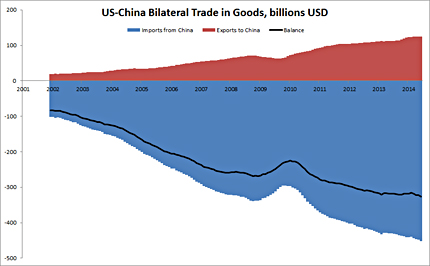 The point estimates suggest that about three quarters of the movement away from the political center induced by trade is the result of increasing conservativeness among elected legislators, while one quarter is due to increasing liberalness.

….Districts subject to larger increases in import competition from China are substantially less likely to elect a moderate legislator….Comparing more and less trade-exposed districts, the more-exposed district would become 18.5 percentage points less likely to have a centrist in power between 2002 and 2010. To put this magnitude in context, over the 2002 to 2010 time period, the fraction of “moderates” in the House declines to 37.1% from a baseline of 56.8%.

The authors believe that import competition from China following their accession to the WTO has played a big role in the polarization of American politics:

China bashing is now a popular pastime as much among liberal Democrats as among Tea Party Republicans. Our contribution in this paper is to show that this political showmanship is indicative of deeper truths. Growing import competition from China has contributed to the disappearance of moderate legislators in Congress, a shift in congressional voting toward ideological extremes, and net gains in the number of conservative Republican representatives, including those affiliated with the Tea Party movement.

Why did this benefit conservatives more than liberals? At a guess, it’s because they were better able to tap into voter anger. Both sides could make similar economic arguments, but conservatives could add a healthy dose of nationalism to the mix, something that liberals are a lot less comfortable with. That made their attacks on China more resonant.

Ironically, voters on both sides were basically getting scammed. Big talk aside, neither conservatives nor liberals did much to reduce trade with China. In fact, it’s not clear there was much they could have done. Short of abandoning the WTO and starting a trade war, there really weren’t a lot of options on the table. The net result, then, was lots of windy rhetoric and a more polarized Congress, and eventually the Donald Trump campaign. But Trump, like all the rest of the China bashers, has nothing more than windy rhetoric too.

At this point, the game is almost fully played out anyway. China’s impact on American jobs is a done deal, with little more to come as China itself moves to a less manufacturing-oriented economy and finds itself in competition with countries like Vietnam and Indonesia. But if the authors of this paper are right, the American political scene will continue to pay a price for decades to come.