UBI is having a moment. Not a big moment, mind you, but a moment nonetheless. Why?

UBI stands for Universal Basic Income, and it’s just what it sounds like. It guarantees everyone, rich and poor alike, a certain minimum cash income and replaces the alphabet soup of current welfare programs. No 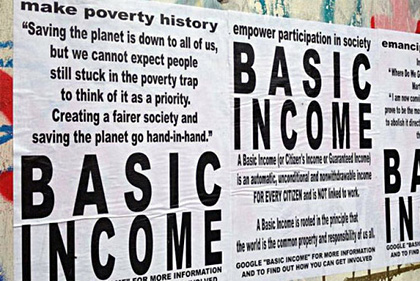 On the right, UBI got a boost a few years ago from Charles Murray, who championed the idea in his book In Our Hands: A Plan To Replace The Welfare State. On the left, the rise of Bernie Sanders has given it a bit of new momentum, even though it’s not part of Bernie’s campaign platform. It’s also gotten some attention thanks to planned experiments in Finland and the Netherlands, and a referendum for a national UBI in Switzerland this summer. On his Freakonomics podcast last week, Stephen Dubner suggests it’s “an idea whose time finally may have come.”

So what are the pros and cons? Here’s a quick, extremely non-exhaustive rundown.

There’s a problem inherent with all means-tested welfare benefits: they phase out as you make more money. Suppose you make $15,000 per year, and above that point you lose 50 cents of welfare benefits for every dollar you earn. This means that working more hours or taking a more challenging job doesn’t pay much. On net, a raise of $5,000 per year only gets you $2,500 of actual compensation. This reduces the incentive to work harder in order to escape poverty. But a UBI is different: Since you continue to receive a UBI no matter what your income, it has no effect on work incentives.

Means-tested programs all have to be administered, and that costs money. A UBI reclaims nearly all of that. The government just sends out a monthly check to every citizen, and that’s it. Admin costs are minuscule.

#3: A UBI allows the poor to live freer lives.

Poor people no longer have to endure a demanding gauntlet of welfare offices and complicated forms. They don’t have to prove their income is low, or that they have kids, or that they’re actively looking for work. Nor do they have to accept only the specific forms of welfare the government feels like giving them. They just get a check every month, and they can spend it as they please.

A reasonable UBI would probably amount to about $10,000 per year, which works out to a total cost of $3.2 trillion. Of course, we’d also eliminate lots of welfare payments, so the net cost would be less than that. But even accounting for that, it would probably require the federal income tax to be doubled or tripled. That’s a pretty tough sell.

#2: It can’t replace everything.

You can—barely—live on $10,000 per year. But that won’t pay for health care. It won’t pay for public schools for our kids. We’ll still have to keep some welfare programs around even with a UBI. On the plus side, as long as these programs are universal, they generally retain the benefits of a UBI: low admin costs and no bad work incentives.

This is tricky. Option A is to simply include them like everyone else. But this provides a substantial incentive to have children in order to get their UBI, and that’s not something most voters are likely to accept. Option B is to give children a smaller UBI than adults. But would that be enough to provide for them properly? Nobody wants kids to suffer because their parents are poor. How do you ensure that?

#4: What about the elderly?

Should retirees be folded into the UBI? If so, their pensions would be quite a bit lower than they are now. If not, we’d basically be guaranteeing a higher UBI for old people than for young people. Would that seem fair to most people?

#5: Money is a sadly vulnerable commodity.

It’s an unfortunate but painful truth that poor people are often vulnerable to having cash taken away from them. It can be stolen, of course, but more likely it’s simply confiscated by someone they’re living with. This is obviously a problem with earnings of all kinds, but one advantage of existing welfare programs is that it provides a minimum floor to this. A drunk and abusive husband can’t take away your Section 8 voucher or your food stamps or your Medicaid in order to blow it on beer and smokes.

This is just the briefest outline. And it may be that in the near future we no longer have much choice about this anyway. As robots take away more and more jobs, a UBI may be the only realistic answer to a nation full of robots that can replace low-skill workers at almost no cost. If we get to a point where a substantial number of people flatly don’t have the skills to perform any job for any wage, what are we going to do? The most likely answer is that we’ll end up with a UBI whether we like it or not. And that makes it worth thinking about right now.