Dylan Matthews points me toward a new study by Matt Grossmann and David Hopkins that can be summarized in the chart below, which I mashed up from a pair of separate charts: 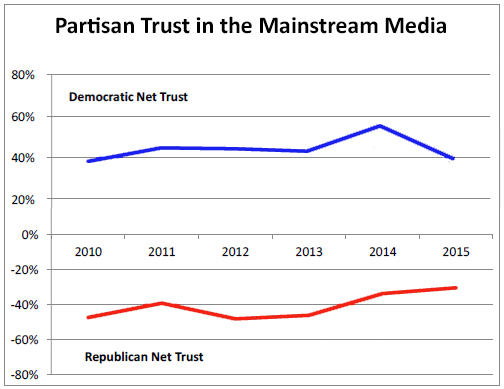 Well, that’s no surprise, is it? Distrust of the lamestream media has been a conservative staple for decades. But Grossmann and Hopkins claim this has a broad, systemic effect on how partisans view the world:

The American party system contains two distinct partisan types: a Republican Party chiefly defined by a common ideological commitment and a Democratic Party that is instead a coalition of social groups. Republican perceptions of widespread bias in the mainstream media encourage party members to view themselves as engaged in an ideological battle with a hostile liberal establishment, turning even their choice of news source into a conscious act of conservative self-assertion.

….Democrats, in contrast, are relatively content to rely on traditional media sources that often implicitly flatter the Democratic worldview but do not portray themselves or their consumers as combatants in a political or ideological conflict….The information environment in which they reside claims to prize objectivity, empiricism, and policy expertise—thus remaining highly congruent with the character of the Democratic Party as a coalition of voters who demand practical solutions to social problems in the form of targeted government action.

OK. Once again, I’m not sure this is really news. So why highlight it? Because I’m disappointed that the authors didn’t take the opportunity to examine the Donald Trump phenomenon in light of all this. In 2016, we’ve learned that perhaps the Republican coalition isn’t actually as ideologically committed as we thought: conservatives are voting for Trump in large numbers despite his rather obvious disdain for standard Fox News right-wing principles. In 2012, the Republican primary battle was between the tea partiers (Gingrich, Santorum, Perry, Bachmann) and the moderates (Romney), but that’s not happening this year. Instead, it’s been a battle between Trump and everyone.

So perhaps Fox has failed? Presented with a populist conservative like Trump, a large number of conservatives have jumped ship and decided that the ideological Fox worldview was never what they cared about in the first place. They liked the outrage and they liked the liberal bashing, but the whole “small government/hooray for corporations/cut capital gains taxes” schtick never really did much for them. They just went along because of the other stuff. In the end, when it came down to a choice between Fox and Trump, Trump won.

Maybe this doesn’t mean anything. Maybe Trump is sui generis and everything will go back to normal if he loses. But it’s certainly worth some hard thought.

In our view, the existence of the conservative media universe is actually central to the story of Trump’s success….Many conservatives out in the electorate might have been open to the argument that Trump’s various policy apostasies should properly rule him out of membership in the conservative movement, but regular voters are not necessarily going to reach such a conclusion by reasoning on their own. Some political authority that they know and trust would need to make this case against Trump in order for it to stick—and today, the authorities that Republican voters know and trust the most are not elected officials or policy intellectuals but leading personalities in the conservative media empire. By and large, these personalities—Hannity, O’Reilly, Rush Limbaugh—have not criticized Trump in this manner, and in fact have often praised him, thus validating him in the eyes of the electorate as a true conservative in good standing.

This sets up an interesting dynamic: “Fox News” vs. Fox News anchors. In its corporate role as an arm of the Republican Party, Fox News is anti-Trump. But most of its anchors are Trump sympathizers. They care more about maintaining their credibility with their fans than with their bosses—and their bosses don’t have the leverage to do much about it.

I’m not sure what this all means. But it deserves a bit of cogitation.