Kyle Blaine writes today about the news media’s growing uneasiness with the role they’ve played in the rise of Donald Trump. For example, there’s the way they 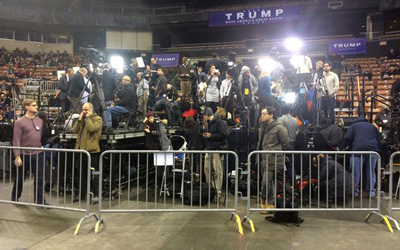 caved in to his campaign’s unprecedented demands about how Trump’s events were to be covered:

According to two sources familiar with the call, the Trump campaign, citing security concerns from Secret Service, dictated to the networks that their camera crews can only shoot Trump head-on from a fenced-in press pen….The terms, which limit the access journalists have to supporters and protesters while Trump is speaking, are unprecedented, and are more restrictive than those put on the networks by the White House or Hillary Clinton’s campaign, which has had Secret Service protection for its duration.

Facing the risk of losing their credentialed access to Trump’s events, the networks capitulated….When Trump complains that the media does not “turn the cameras” to show the size of his crowds, it’s because they can’t.

Josh Marshall tweetstormed a couple of days ago that the press is blameless in Trump’s rise. “Yes there’s tons of crappy coverage,” he concluded. “None of it is responsible for Trump’s ascent. That’s due to 1/4 of voting pop deeply drawn to his message.”

I think he’s off base. A quarter of the population has always been drawn to Trumplike messages. That’s the reason folks like Sarah Palin and Glenn Beck have such large followings. Trump has done better than them partly because he’s more media savvy—though Palin and Beck are hardly slouches in that department—but also because the press has slobbered over him unlike any candidate in history. They obey his absurd rules forcing them to televise Trump only head on, as if he’s already president. They allow him to call in to their shows constantly, something they don’t do for other candidates. They televise his speeches in their entirety without comment. They respond to every absurd publicity stunt with 24/7 coverage.

And most importantly, they’ve been doing this since the beginning. It’s one thing to say that Trump is the frontrunner now, so of course he gets lots of coverage. But Trump has been getting round-the-clock coverage since Day 1. This was long before anyone thought he was likely to win the nomination. The cable nets were just chasing ratings.

As Marshall says, maybe that’s inevitable: “If there’s a really big story w/huge reader interest, news publications will tend to cover it a lot. Not a wave you can swim against.” But inevitable or not, you simply can’t pretend that it had no effect. Network news operations love to crow about their impact whenever they air some dramatic story that uncovers public corruption, but now they’re pretending that thousands of hours of Trump coverage had no independent effect? Spare me.

I freely acknowledge that it’s hard to pin down Trump when he says ridiculous stuff. But reporters barely even try anymore. They’re apparently afraid that if they truly treat him adversarially, he’ll put them on his enemies list and never talk to them again. Not exactly a profile in courage, is it?