Vladimir Putin announced today that he would begin withdrawing most of his forces from Syria. The move came as a complete surprise—sort of:

But U.S. officials also said that there had been evidence over the last several months that appeared to suggest that Moscow didn’t have plans for a long-term stay at the bases it used in Syria.

For instance, the Russian military didn’t appear to be rotating its equipment—tanks, aircraft and artillery—among bases throughout the country in a way that would be consistent with a military’s plans for a sustained presence. Equipment wasn’t being withdrawn for maintenance, for example, and Russian forces weren’t being rotated in and out, according to U.S. officials.

It’s unlikely that Putin ever really intended to stay for a long time in the first place. His goal wasn’t to help Assad win his civil war, but merely to prevent him from losing—just as there’s a reasonable case to be made that this is basically our goal too on the other side of the fight. It’s realpolitik at its nastiest and most cynical. And while the recently convened peace talks in Geneva provided Putin with a convenient pretext to get out, there was more to the timing than just that:

Russia is also facing deepening economic problems caused by the collapse in global oil prices, and the announcement may reflect Mr. Putin’s desire to declare victory and extricate his country from a costly military venture….There have been growing signs of differences between Russia and the Syrian government over the Geneva talks, which Moscow has pressed hard for, along with Washington. And for Mr. Assad, the prospect of Russia’s leaving him to fend for himself is sure to focus his mind on following its lead — advice that Russian officials have publicly offered him in recent days.

In the end, Putin managed to prop up Assad for a little while longer and reassert control over Russia’s only military base outside of its own territory. He also earned a place at the negotiating table and, perhaps, kept Iran’s influence over Syria at bay. In terms of pure military achievement, however, it was a modest affair. The maps below, from ISW, show what’s happened over the past six months. Syrian forces have made progress toward retaking Aleppo, which is significant but hardly tide turning. And that’s about it. What’s more, with Russian air support gone and Kurdish forces also advancing on Aleppo, it’s unclear if Assad can hold this ground in the long term. Stay tuned. 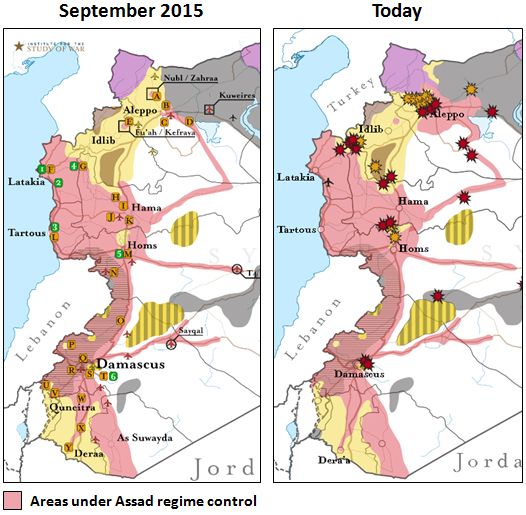