Liz Sly of the Washington Post has an unusually optimistic report about the fight against ISIS today. She reports that both Palmyra and a string of villages in northern Iraq are being overrun by US-backed forces:

These are just two of the many fronts in both countries where the militants are being squeezed, stretched and pushed back….Front-line commanders no longer speak of a scarily formidable foe but of Islamic 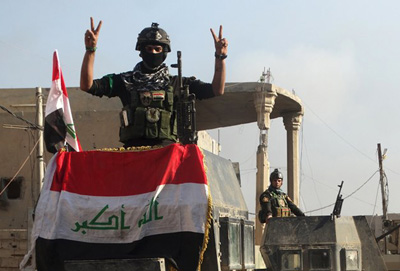 State defenses that crumble within days and fighters who flee at the first sign they are under attack.

….Most of the advances [] are being made by the assortment of loosely allied forces, backed to varying degrees by the United States, that are ranged along the vast perimeter of the Islamic State’s territories. They include the Kurdish People’s Protection Units, or YPG, in northeastern Syria; the Kurdish peshmerga in northern Iraq; the Iraqi army, which has revived considerably since its disastrous collapse in 2014; and Shiite militias in Iraq, which are not directly aligned with the United States but are fighting on the same side.

The U.S. military estimated earlier this year that the Islamic State had lost 40 percent of the territory it controlled at its peak in 2014, a figure that excludes the most recent advances.

….In eastern Syria, the seizure late last month of the town of Shadadi by the Kurdish YPG — aided by U.S. Special Forces — was accompanied by the capture of nearly 1,000 square miles of territory….The operation was planned to take place over weeks. Instead, the town fell within days, said a senior U.S. administration official, who spoke on the condition of anonymity to talk candidly.

“Shadadi was going to be a major six-week operation,” he said. “The ISIS guys had dug trenches and everything. Instead, they completely collapsed. They’re collapsing town by town.”

This could just be happy talk, of course. It wouldn’t be the first time. Or maybe ISIS is regrouping for an epic last stand. But if this reporting is true, it represents a self-sustaining dynamic: rumors of ISIS collapse inspire Iraqi forces to fight harder, which in turn contributes to ISIS collapse. At this point, Sly reports, the issues in the way of further progress are as much diplomatic as military: “We could probably liberate Mosul tomorrow, but we would have a real mess on our hands if we did,” says Michael Knights of the Washington Institute for Near East Policy.

I wonder what Republicans will do if ISIS is truly on the run by the time campaign season starts in the fall? Whine that they could have done it even faster? Complain that we didn’t steal all the oil while we were at it? They’re barely going to know what to do with themselves if the weak-kneed appeaser Barack Obama first kills bin Laden and then takes out ISIS.