In American Amnesia, Jacob Hacker and Paul Pierson defend the mixed economy from the conservative apostles of pure market forces. One of the problems they identify with unchecked markets is externalities, the effects of private actions on others. The problems associated with externalities, they say, become greater 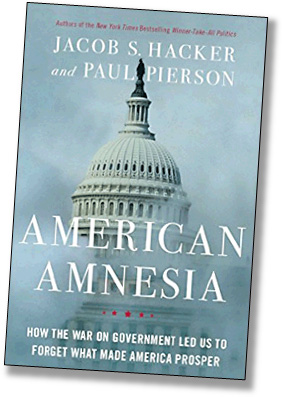 as population increases and countries become more urbanized. For example:

Consider one of the great health scourges of the mid-twentieth-century: lead. Exposure to lead was far greater in inner-city neighborhoods—less because of the prevalence of lead paint than because lead additives in gasoline accumulated in automobile-dense urban areas. The consequences were terrible. At the level experienced by kids in urban communities from the 1950s through the 1970s (the decade that saw the phaseout of leaded fuel), lead exposure causes substantial drops in IQ. It also diminishes impulse control. Substantial evidence now suggests that these effects may have played an important role in driving the epidemic of violent crime that began in the 1960s, as well as rising rates of teen pregnancy.

Did they toss that in there just for me? I’d like to think so.

Of course, it’s also a very good example of their thesis. Private actors had no particular reason to remove lead from gasoline, and market forces alone probably would never have eliminated it. It was government regulation, in response to research results that were largely government-funded, that got rid of lead in gasoline. That’s the mixed economy at work: private buyers and sellers created the basic market, with the government stepping in to regulate it for the common good. The result is better than a pure free market (which produces lead-poisoned kids) and better than socialism (which likely produces shortages of gasoline). For most of the 20th century, the mixed economy was a pillar of all advanced economies, including ours.

But beginning in the 1980s, American conservatism took a turn away from paying even lip service to the mixed economy. Government regulation was bad, full stop. The free market was good. The less that government was involved in the economy, the faster the country would grow, benefiting everyone.

Everyone who gets rich from an untrammeled economy, anyway. The rest of us get lead in our gasoline, pathogens in our food, the most expensive health care in the world, and a financial system so imperious that it can produce an economic collapse and then demand that it get bailed out. How did this happen? Hacker and Pierson follow the trajectory of the Republican Party since its radicalization began during the Reagan administration, and conclude that the GOP’s fealty to wealthy and powerful rent-seekers has been pretty successful:

Those whose job it is to serve the public have more to do and less with which to do it. The same is not true of the private industries they are regulating….The typical public worker lives in a world of scarcity. The typical lobbyist lives in a world of abundance: lavish salaries, PR wizards, mercenary experts who can provide just the favorable finding or legislative language needed. No wonder the federal government has hemorrhaged talent.

….The root of the problem is simple: a growing mismatch between the enormous outside pressures on government—more and more organizations in Washington spending more and more to shape policy—and the weakened capacity of government to channel and check those pressures. “More than three decades of disinvesting in government’s capacity to keep up with skyrocketing numbers of lobbyists and policy institutes, well-organized partisans, and an increasingly complex social and legal context,” argue the political scientists Lee Drutman and Steven Teles, have created “a power asymmetry crisis.”

Unregulated markets aren’t generally a big problem in small economies. In the United States, it wasn’t until the Robber Baron era of the late 19th century that underregulation became a serious issue. The backlash against the Morgans and the Rockefellers eventually produced the modern mixed economy, which served the country well for the rest of the century. But now, as Hacker and Pierson say, we’ve developed a sort of historical amnesia. A lot of Americans have forgotten both the bad old days and the government actions that made them better. All that’s left is a seething anger—stoked by a modern GOP dedicated to corporations and the rich—toward jack-booted government bureaucrats who prevent the economy from taking flight. Get rid of the regulators, and all will be well again.

That might be true if we could also return to the America of the 1830s. But we can’t. The United States is bigger, more complex, and far more technologically advanced than it was two centuries ago, and there’s simply no plausible counterweight to powerful corporate rent-seekers other than government regulation. Like it or not, the mixed economy is the only way to run a modern country.

Hacker and Pierson do a good job of telling both the history of the mixed economy as well as its more recent breakdown. If you’re already familiar with this story, there might not be much new here for you. For the rest of us, it’s as good an introduction as you’re likely to find.