The latest from Flint:

Mayor Karen Weaver is calling for immediate removal of lead pipes from Flint’s water distribution system, and is expected to detail her request at a news conference later Tuesday, Feb. 2….Replacing all of Flint’s lead service lines has been estimated to cost more than $60 million.

The latest from New Jersey:

Eleven cities in New Jersey, and two counties, have a higher proportion of young children with dangerous lead levels than Flint, Mich., does, according to New Jersey and Michigan statistics cited by a community advocacy group….In New Jersey, children 6 years of age and younger have continued to ingest lead from paint in windows, doors and other 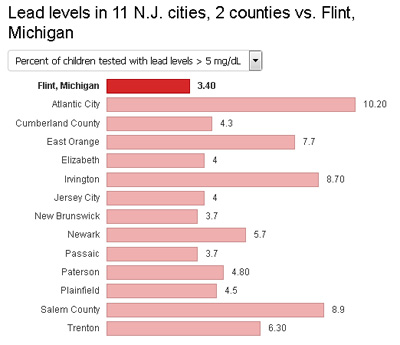 “In light of the Flint debacle, we wanted people to understand that water is not the only thing that’s poisoning children,” she said. “Most people think the lead problem was solved when we took lead out of gasoline and new homes in the 1970s, but that’s not true.”

I suppose it’s inevitable that residents of Flint want to replace their lead pipes. But it’s probably unfortunate. At this point, Flint’s water pipes are almost certainly pretty safe, and will become even safer over the next few months as properly treated waters rebuilds the scale inside the pipes. A multi-year program to replace them will most likely have no effect at all on childhood lead levels.

So what would I spend $60 million on if I had the choice? Two things:

In both cases, the lead poisoning mechanism is the same: small children get lead dust on their fingers and then lick it off. This is one of the reasons that lead poisoning is a much smaller problem for adults than for children. Lead in small doses doesn’t affect mature brains strongly, and even if it did, adults mostly don’t play in the dirt and then lick their hands. Kids do.

The first step in soil abatement is mapping: figuring out which spots have the highest levels of lead contamination. The next step is cleaning it up. There are multiple ways of doing this, some cheap and some expensive, and only a professional evaluation can determine the best method in specific areas.

Anyway, that’s that. The problem, of course, is that there’s no chance at all that anyone is going to give Flint $60 million to clean up its soil and its old windows. But someone might give them $60 million to replace their lead pipes. It won’t do nearly as much good, but at least it’s something.