The Independent reports that about 5,000 girls and women in Britain are subjected to female genital mutilation each year: “FGM is carried out for cultural, religious and social reasons within families and communities where it is believed to be a necessary preparation for adulthood and marriage.” Ian Tuttle is exasperated by their kid-glove treatment of the practice:

True. But which cultures? Which religions? Hint: It’s not Anglicans….Let’s be frank: FGM is not spontaneously afflicting preteen and teenage girls; it’s not an illness being randomly caught. It’s a barbarous act being perpetrated by parents of young girls in specific and identifiable cultural/religious groups. Refusing to acknowledge that reality does not help to protect 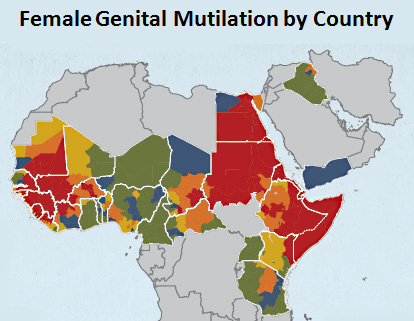 vulnerable women; it aids those who seek to repress them.

Hmmm. “Not Anglicans.” Obviously Tuttle is blaming Muslims. Oddly, though, he doesn’t come right out and say this. Why? The map on the right might provide a clue.

According to UNICEF, the practice of FGM is mostly limited to central Africa. It’s not common in Morocco or Algeria or Libya or Saudi Arabia or Oman or Jordan or Syria or Iran. Basically, it’s concentrated in a small swath of states in western Africa and another swath of states along the Red Sea (those in red and orange). With the exception of a handful of countries, only a small percentage of women who undergo FGM believe the practice is required by religion.

Still, that religion is Islam. There’s no need to tiptoe around that ugly fact. Or is there? 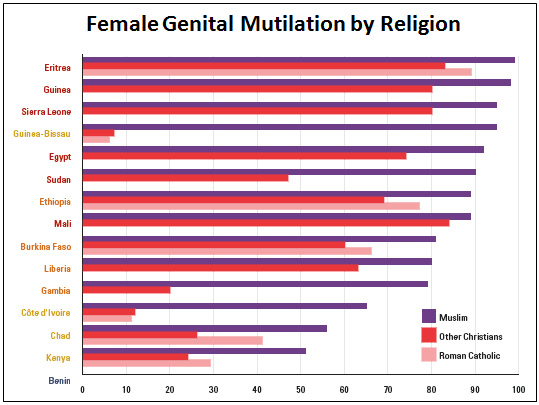 Basically, FGM is a practice limited to certain parts of Africa—and although it’s more common among Muslims than other religions, Christians are pretty close in most countries. As for Britain, its FGM problem is more due to where their African immigrants come from than it is to Islam per se.

Female genital mutilation is a barbaric practice, and Muslims in many countries are far too tolerant of it. Anyone who fights it—as do many feminist NGOs as well as Islamic clergy and scholars—is literally doing God’s work. But it’s uncommon in the heartland of Islam, and in Africa it’s practiced by plenty of Christians too. The only way to represent it as a uniquely Islamic problem is to imply it with a wink and a nudge but without actually producing any evidence.