Perhaps you remember the case of Larycia Hawkins. She’s the professor at Wheaton College who declared on her Facebook page that Muslims and Christians worship the same god. Wheaton College follows the “evangelical Protestant tradition,” which apparently has different thoughts on this 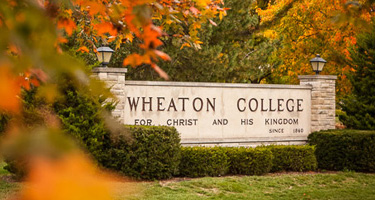 matter, and as a result Hawkins is in the process of being fired.

Over at National Review, David French says that this ought to be entirely uncontroversial:

But this is Christian higher education, and the Left is taking direct aim at Christian academic freedom and institutional liberty. In 2014, it launched an ill-fated attack on Gordon College’s accreditation, and last month the LGBT Left issued a report loudly condemning Christian colleges for having the audacity to exercise their statutory and constitutional right to opt out of Title IX. So it should come as no surprise that the Left is rallying around professor Hawkins, trying to pressure Wheaton into yielding on its statement of faith.

I read this over lunch, and with nothing more pressing on my mind than eating a slice of pizza, I decided to click those four links to find out just what kind of pressure the Left was bringing to bear. I urge you to click yourself to check my work. The first three go to a trio of little-read diaries at the Huffington Post. Here are the most impassioned statements I could find in each of the three:

Letter endorsed by Su’ad Abdul Khabeer and 26 others: In our view, the measures taken by Wheaton administrators…dampen the spirit of free inquiry so crucial to the academic environment; ultimately depriving the student body of the benefit of a deeply dedicated educator….[We] call upon her employers to renew their own commitment to the principles of tolerance and academic freedom.

Ken Wilson: There’s a way out of this morass. But it requires a commitment to the apostolic counsel of Romans 14-15. In a nutshell it boils down to this: we’re going to disagree over highly contentious issues….In the meantime, we can feast ourselves on the rich fare of mere Christianity. In a community shaped by Romans 14-15, there would be plenty of room for Julie Rodgers and Dr. Larycia Hawkins at the table.

Pamela A. Lewis: Do Christians and Muslims worship the same God? To the extent that Christians and Muslims come from the same Abrahamic tradition, yes they do….However, when it is a question about what these faiths call God and how they worship God, there are significant differences with respect to rituals and patterns of devotion….Whether or not Professor Hawkins has violated Wheaton College’s Statement of Faith will be decided by Wheaton College. But I am with those who believe that she was moved by her understanding of Christ’s commandment to love and stand with the vulnerable and the stranger, whoever they may be at the moment.

That’s…not…really very fiery stuff. I imagine the administrators at Wheaton College can still sleep nights. The fourth link goes to a pretty straightforward CNN story in which Hawkins herself is critical of Wheaton’s actions, which is hardly surprising since she’s the one being fired.

So where do these milquetoast statements leave us? French acknowledges that so far, “the Left has merely used its powers of persuasion to try to move Wheaton from its statement of faith.” But what about tomorrow? “Schools that don’t conform to leftist orthodoxy may soon consequences far worse than a barrage of negative news coverage.”

Maybe so. But it’s always worth clicking the links. If this is the best that the big, bad Left can do—and I assume French would have linked to worse if it existed—I think Christian colleges are probably not in any imminent danger. It’s pretty stunning sometimes just how little criticism it takes to bring out the victim in us all.