Warning! I have not followed Deflategate except in passing.1 I don’t have the kind of grassy knoll knowledge of what happened that lots of people seem to. The naive question that I’m about to pose may inspire jeers in those of you who have immersed yourselves in it.

Anyway: the first thing that I and thousands of other geeky types thought of when Deflategate first burst onto the scene was the Ideal Gas Law. I didn’t actually try to calculate anything, but I remember vaguely thinking that the temperature probably dropped about 5 percent between the locker room and the field, so the pressure in the footballs might plausibly have dropped about 5 percent too. Then again, maybe the volume of the footballs changed slightly. Hmmm. Then I got sick and didn’t care anymore—about Deflategate or anything else. Joe Nocera writes about this today:

John Leonard is a professor at the Massachusetts Institute of Technology….When the Deflategate story broke after last year’s A.F.C. championship game between the New England Patriots and the Indianapolis Colts [in January], he found himself fixated on it….“Of course, I thought of the Ideal Gas Law right away,” Leonard says, “but there was no data to test it.”

….In May, the data arrived….Numbers in hand, Leonard went to work. He bought the same gauges the N.F.L. used to measure p.s.i. levels. He bought N.F.L.-quality footballs. He replicated the temperatures of the locker room, and the colder field. And so on….The drop in the Patriots’ footballs’ p.s.i was consistent with the Ideal Gas Law.

By early November, he had a PowerPoint presentation with more than 140 slides….A viewer who watched the lengthy lecture edited it down to a crisp 15 minutes….It is utterly convincing.

This is what’s always puzzled me. You don’t need to be an MIT professor of Measurement and Instrumentation to get a good sense of what happened, and you don’t need to spend a year pondering the minutiae of the Ideal Gas Law and writing 140 slides about it. Get a bag of footballs, inflate them to 12.5 psi, and take them outside on a 50-degree day. Wait an hour and measure them again. Maybe do this a few times under different conditions (wet vs. dry, different gauges, etc.). It would take a day or two at most.2 The league office could have instructed the referees to do this quick test just to see if 11.3 psi footballs were plausibly legal, and that might have been the end of it. Why didn’t that happen? Why didn’t lots of people try this? Even if you only have one football to your name, it wouldn’t be hard to at least get a rough idea. Inflate it, put it in your refrigerator for an hour, and then remeasure it.

Since I wasn’t paying attention, it’s quite possible that lots of people did this. Did they? Did the league? What happened here?

2Because I’m an optimistic guy, I’m just going to assume that this would be done in at least a minimally rigorous way. Nothing that would be necessary for publication in Nature. Just good enough to satisfy Mr. Lantz, my high school physics teacher. 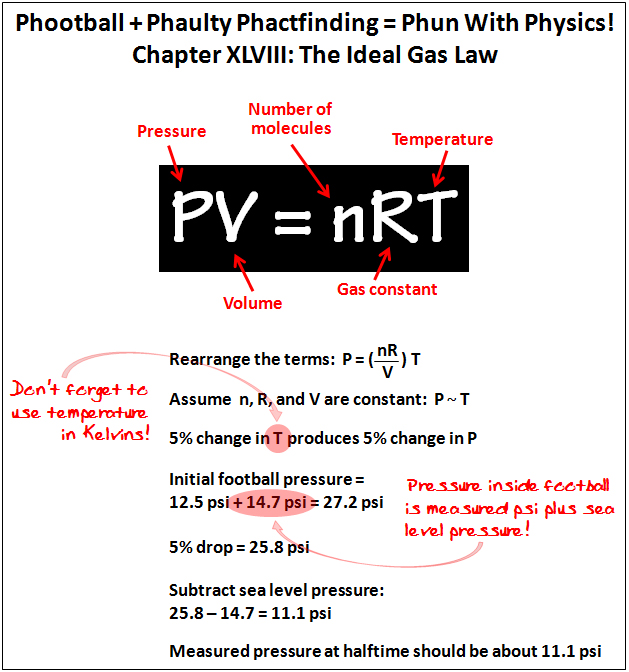