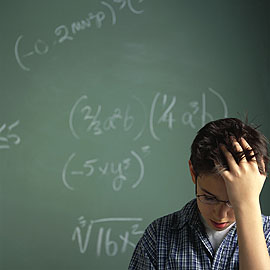 I’m not as cynical about the purpose of universal education as the late Aaron Swartz, but I love this historical retrospective from a piece of his reprinted today in the New Republic:

In 1845, only 45 percent of Boston’s brightest students knew that water expands when it freezes….In 1898, a…Harvard report found only 4 percent of applicants “could write an essay, spell, or properly punctuate a sentence.” But that didn’t stop editorialists from complaining about how things were better in the old days. Back when they went to school, complained the editors of the New York Sun in 1902, children “had to do a little work. … Spelling, writing and arithmetic were not electives, and you had to learn.”

In 1913…more than half of new recruits to the Army during World War I “were not able to write a simple letter or read a newspaper with ease.” In 1927, the National Association of Manufacturers complained that 40 percent of high school graduates could not perform simple arithmetic or accurately express themselves in English.

….A 1943 test by the New York Times found that only 29 percent of college freshmen knew that St. Louis was on the Mississippi….A 1951 test in LA found that more than half of eighth graders couldn’t calculate 8 percent sales tax on an $8 purchase….In 1958, U.S. News and World Report lamented that “fifty years ago a high-school diploma meant something…. We have simply misled our students and misled the nation by handing out high-school diplomas to those who we well know had none of the intellectual qualifications that a high-school diploma is supposed to represent—and does represent in other countries. It is this dilution of standards which has put us in our present serious plight.”

A 1962 Gallup poll found “just 21 percent looked at books even casually.” In 1974, Reader’s Digest asked, “Are we becoming a nation of illiterates? [There is an] evident sag in both writing and reading…at a time when the complexity of our institutions calls for ever-higher literacy just to function effectively.”

Education was always better in the old days. Except that it wasn’t. As near as I can tell, virtually all the evidence—both anecdotal and systematic—suggests that every generation of children has left high school knowing as much or more than the previous generation. Maybe I’m wrong about that. But if I am, I sure haven’t seen anyone deliver the proof.