When I went to bed last night, the hot topic on my Twitter feed was the occupation of a United States Fish and Wildlife Service building in the Malheur National Wildlife Refuge. This is near Burns, Oregon, which would probably need to be a little closer to 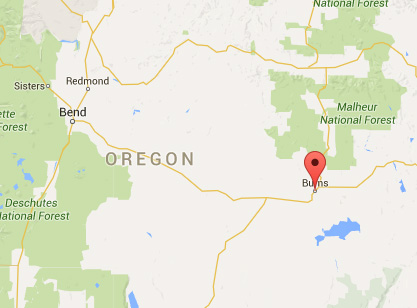 Bend to even qualify as the middle of nowhere. As for the building itself, it’s even more remote.

So, anyway, it turns out that a bunch of self-described militiamen, headed by Ammon and Ryan Bundy of Bundy ranch fame, decided to take over the building as a protest against federal tyranny. The particular tyranny at issue was the imprisonment of a couple of local ranchers who had burned some federal land next to their property. None of these details really matter much, though. The question is, what should we do about these guys? Here’s David Atkins:

As with ISIS, the Bundy clowns are actively seeking a confrontation with the big bad wolf of Big Western Government. They believe that an active confrontation will spark a movement that will lead to the overthrow of Big Brother. So far, especially after the incidents at Ruby Ridge and Waco, American leaders have been disinclined to give those opportunities to the domestic militiaman terrorists. Cliven Bundy and his miscreants got away with a wide range of crimes due to the forbearance of federal officials.

But the problem with taking that hands-off approach is that the treatment of left-leaning protesters is far different. Occupiers and Black Lives Matter protesters aren’t met with hand wringing and gentle admonishments. They’re met with batons and tear gas….So on the one hand it’s understandable that federal officials would not want to make martyrs of the right-wing domestic terrorists who are actively seeking to engage in a confrontation and make themselves appear to be downtrodden victims of the federal beast. But on the other hand, it’s infuriating that they receive special kid glove treatment that would not be afforded to minority and liberal activists.

I feel that if Bundy’s little crew wants to occupy a federal building and assert that they’ll use deadly violence against any police who try to extract them, then they should get what they’re asking for just as surely Islamist terrorists would if they did likewise. As much as restraint is the better part of valor when dealing with entitled conservative crazies, principles of basic justice and fair play also need to apply. What’s good for one type of terrorist must also be good for another.

It’s crucial to avoid a shoot-out, but it’s equally crucial to assert the rule of law. There’s no need here to repeat the back-down in Nevada, and the ringleaders need to go away for long, long time.

It’s also crucial that Republican politicians — most importantly, the Presidential candidates — be forced to take a stand for or against acts of lawless violence. And that’s not something the President can or should try to manage alone. Everyone needs to speak out, and keep speaking out.

Gotta go with Kleiman here. I understand the gut satisfaction of fantasizing about a Bonnie & Clyde style shootout that leaves the headquarters of the Malheur National Wildlife Refuge soaked in terrorist blood, but that’s really not what any of us should want. These guys aren’t terrorists, anyway. They’re just as misguided as real terrorists, but they haven’t taken anyone hostage or threatened to blow up an airplane. They’re just morons with guns. We can wait them out, or fill the place with tear gas, or play loud music all night like we did with Manual Noriega. I don’t know. I’ll leave the tactics up to professionals.

In any case, I don’t really want to kill these guys, and I don’t think their movement needs martyrs anyway. Just let them rot quietly away for a while until they finally come slinking out of their hole into the hands of federal officials. Then they can be put on trial. By that time, they’ll just seem like a bunch of pitiful loons, and their “movement” will be dead. That’s all I care about. No need to give them more publicity than they’ve already gotten.

But, yes, I would like to hear all the Republican presidential candidates denounce them in no uncertain terms. That shouldn’t be so hard, should it?