Is Donald Trump a sign of things to come? Or is he sui generis?

I tend toward the latter. I think Trump is basically the culmination of a series of conservative populist blowhards who have run for president recently. It started with Ross Perot, a Mexico basher like Trump. He was pretty popular with all his charts and his giant sucking sound. But in the end, he didn’t really get many votes. Pat Buchanan ran in a similar mold, and he even won New Hampshire and almost won Iowa. Coincidentally, he was another Mexico basher! But he lost. In 2008 we were treated to the true proto-Trump, Sarah Palin. Unfortunately, she had major flaws: she was a woman;1 she had very limited experience; her version of word salad was truly incomprehensible; and she was terrifyingly ignorant about practically everything and unable to paper over it. She and John McCain lost. 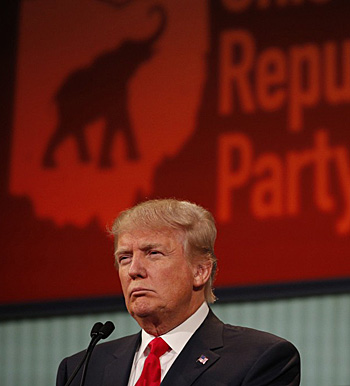 The 2012 primaries brought us a series of minor-league pseudo-populist blowhards in Michele Bachmann, Herman Cain, and Newt Gingrich. Coincidentally, they made Mexico bashing into a true team sport! And they all lost.

So now we have Trump. Like Palin, he has an almost animal instinct for what the conservative base wants. He was smart enough to make Mexico bashing his key calling card. His version of word salad is entertainingly stream-of-conscious-y, but almost always makes sense. He’s 69 years old. He’s male. He has lots of executive experience. He’s a billionaire who doesn’t need to beg for money. He’s usefully flexible when it comes to abandoning the unpopular parts of conservative ideology. He’s terrifyingly ignorant, but has an innate talent for changing the subject or simply blowing off the problem with some version of “It’ll be easy. Just wait and see.” And he’s uncommonly skilled at self-promotion and projecting dominance on TV. He’s the ideal conservative populist blowhard.

And he’s showing signs of winning. But I don’t think he’s blazing a trail here. He just happens to be perfect for the part, and he has a style that comes to him naturally. Not many people can pull that off, and you can’t really teach it.

So there’s nothing all that new here. We’ve seen Trump’s schtick before in Perot, Buchanan, Palin, Bachmann, Cain, and Gingrich. Nobody should be surprised that a big chunk of the Republican base likes this stuff. They’ve liked it for a long time. Trump is just doing it better than all these others.

In the end, though, I think he’ll meet the same fate. He’ll do better than any of his predecessor blowhards, but that won’t be enough to actually win. And though I might eat my words in 2020, I don’t think we’ll see his like again. In the end, he doesn’t represent an existential threat to the Republican Party; he just represents business as usual pulled off with more flair than usual. He’s sui generis.

1I’m not defending this, just reporting it. Like it or not, she’s a young woman who oozes a smirking sort of pulchritude, and that’s not a recipe for being taken seriously in this country. Plus all the other stuff, of course.