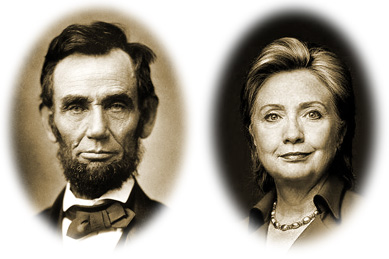 up with a bit of history that shocked everyone. Here’s the transcript:

He kept his eye on the future and he also tried to keep summoning up the better angels of our nature. You know, he was willing to reconcile and forgive. And I don’t know what our country might have been like had he not been murdered, but I bet that it might have been a little less rancorous, a little more forgiving and tolerant, that might possibly have brought people back together more quickly.

But instead, you know, we had Reconstruction, we had the re-instigation of segregation and Jim Crow. We had people in the South feeling totally discouraged and defiant. So, I really do believe he could have very well put us on a different path.

It’s not totally clear to me what Hillary meant by that, but it does seem like a peculiar way of saying whatever she was trying to say. But other people figured it out right away. Here’s Matt Yglesias Voxsplaining:

This is the version of history that I read as a kid in Daniel Boorstin’s Landmark History of the American People; it reflects a conventional wisdom among historians that became popular in the early 20th century and was later etched into the quasi-official history of the Democratic Party. But by the time I was reading it in the late 1980s, it was already on its way out among academics.

….Clinton is loosely glossing what is known as Dunning School historiography, named after Columbia professor William Archibald Dunning and his students. The key emotional note of the Dunning School was the idea that the Civil War itself, rather than the widespread enslavement that led to the Civil War, was tragic, and that the postwar effort of Radical Republicans in Congress to enfranchise the Southern black population had been “a serious error” that impeded restoration of the Union.

Only once the mixed-race regimes of freedmen, “carpetbaggers” (Northerners who’d moved South), and “scalawags” (pro-Northern Southern whites) had been displaced in favor of white supremacist governments was it possible for the South to be peacefully reincorporated into the nation.

That’s what Hillary was getting at? How about that. This is yet another example of a historical “debate” that goes right over my head. Dunning? Never heard of the guy. Reconstruction was a mistake? I went to high school in the 70s, and I’ve never heard this interpretation except when it’s being debunked as gauzy Gone With the Wind nostalgia. The only history I’ve ever read has made it clear that Reconstruction was a flawed but noble effort, and it failed mainly because white Southerners engaged in a war of terror against black Southerners.

Now, I grew up in California, not the South, so that makes a difference. And by chance, I took almost no history classes that covered the postbellum era in America. I just read about it on my own here and there. But “here and there” means ordinary historical accounts, not modern liberal historiography. Nonetheless, none of them ever so much as put the Dunning notion in my head.

So I somehow missed out on all this. I’ve never had to relearn my postbellum history. But Hillary Clinton is, I’m sure, very well read on all this, and I doubt that she’s unaware of why Reconstruction failed. My best charitable guess is that she didn’t really mean to say anything except that Lincoln might have implemented a savvier, more politically durable version of Reconstruction if he had lived. That’s perfectly plausible—though I personally doubt that anything could have quelled Southern intransigence much—and fits with her theme that Lincoln was a great man, but also a pragmatic president who knew how to pull the levers of power.

I guess we’ll never know. Unless someone asks her, that is.

UPDATE: Someone asked her, and her campaign spokesperson responded:

Her point was that we might have gotten to a better place under Lincoln’s leadership. What we needed after the Civil War was equality, justice, and reconciliation. Instead we saw the federal government abandon Reconstruction before real change took hold, which ultimately led to a disgraceful era of Jim Crow.

And as she talks about frequently, too many injustices remain today. Attempts to suppress voting rights go back to racist efforts against Reconstruction, and in fighting for voting rights and equality today we are continuing a long struggle that still has to be fought and won in our own generation.

Pretty much as I suspected.