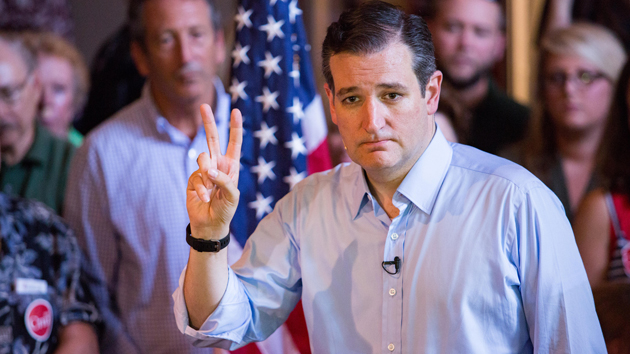 One of the interesting things about the GOP primary race is that uber-conservative Ted Cruz is a bit of a dove when it comes to foreign policy. It’s not always easy to see this behind the bellicose rhetoric favored by Republicans, but even at the very beginning of Cruz’s campaign he said things like, “It’s worth noting, in eight years, the largest country Ronald Reagan ever invaded was Grenada.” In the four debates so far, Cruz has adopted less hawkish positions than most of the other candidates, and today he spelled out his national security stance in an AP interview:

While promising to destroy the Islamic State, beat back aggression from Russia, China and Iran, and ensure extremists don’t infiltrate the U.S. homeland, Cruz also places notable limits on his approach to national security. While Syrian president Bashar Assad is undoubtedly a “bad man,” removing him from power would be “materially worse for U.S. national security interests.” He is unwilling to send more U.S. ground forces into the Middle East and rejects the idea that torture can serve as an appropriate interrogation tool.

But if Cruz is generally trying to position himself as the most conservative candidate running, why the restraint on foreign policy? Brian Beutler argues that it’s because Cruz understands the conservative base better than Marco Rubio and some of the other candidates:

Cruz is highly attuned to the views and grievances that animate Republican voters, even when they are out of step with the right-intellectual consensus. One of these arenas, where the right-wing position on a left-right axis fails to neatly line up with Republican voter sentiment, is foreign policy.

Though they share a desire to be tough on terrorism, grassroots conservatives, unlike many Washington hardliners, don’t want the U.S. mired in unbounded entanglements. Here, the rightmost position—Rubio-esque neoconservatism—is identified with the dreaded Washington establishment, while organic conservative preferences are reflected in broad support for less militarily adventurous candidates. Republican voters trust Donald Trump to fight terrorism more than any other candidate by a wide margin….These voters consider anti-terrorism a priority but are uninterested in a return to the George W. Bush doctrine. It’s why Trump’s line about “bomb[ing] the shit/hell” out of ISIS is such a hit with his supporters—but those supporters would also rather Russia get bogged down in an ugly war than us.

It’s also why Cruz isn’t crouching against Rubio’s foreign-policy attacks, but counter-striking with a ferocity, and an approach, that will surprise the shapers of conventional wisdom.

This difference is likely to become sharper over the next month or two. Both Rubio and Cruz probably think it’s helpful to carve out some concrete differences with the other, and both probably think their version of foreign policy is better attuned to the current Republican id.

So who’s right? I wouldn’t presume to guess at the details of the Republican id at the moment. But I will say that both Iowa and New Hampshire probably still bear traces of traditional conservative isolationism, and Cruz’s approach might go down pretty well there. Once the primary moves to other states, who knows? But wins in the first two states sure wouldn’t hurt Cruz’s chances.