Earlier this year, the news was full of reports about cities in which the murder rate had increased 30, 40, even 50 percent since 2014. Was it the fault of Ferguson, which prompted so much anti-police animus that cops started pulling back, afraid to do their jobs for fear of being the target of angry mobs and the evening news?

That’s a hard question to answer, but the first order of business is to figure out if the murder rate has really gone up in the first place. The FBI won’t have official figures for a long time (they’re still working on 2013), but a couple of months ago the Brennan Center took a crack at this and estimated that the murder rate for all of America’s largest cities was up 11 percent this year. That’s a lot less scary than 50 percent, but it’s still a pretty sizeable increase. Heather Mac Donald is unhappy that liberals are trying to downplay it:

Good policing over the past two decades produced an extraordinary 50% drop in crime. America isn’t going to give all that back in one year. The relevant question: What is the current trend? If this year’s homicide and shooting outbreak continues, those 1990s violent crime levels will return sooner than anyone could have imagined.

….Cops making arrests in urban areas are routinely surrounded by bystanders, who swear at them and interfere with the arrests. The media and many politicians decry as racist law-enforcement tools like pedestrian stops and broken-windows policing—the proven method of stopping major crimes by going after minor ones.

….To acknowledge the Ferguson effect would be tantamount to acknowledging that police matter, especially when the family and other informal social controls break down. Trillions of dollars of welfare spending over the past 50 years failed to protect inner-city residents 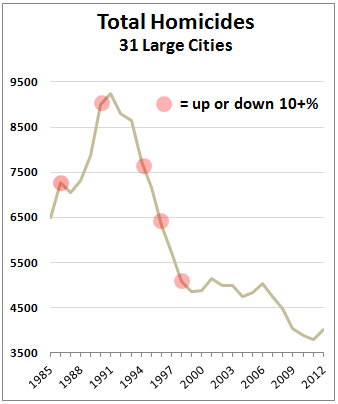 from rising predation. Only the policing revolution of the 1990s succeeded in curbing urban violence, saving thousands of lives. As the data show, that achievement is now in jeopardy.

First things first: no one thinks that “good policing” is responsible for the massive drop in violent crime over the past two decades. It may be part of the reason, but it’s certainly not the whole reason, or even the main reason. And pedestrian stops and broken windows are the subject of intense controversy. They’re the farthest thing from “proven” you can imagine. This is true whether or not you believe that gasoline lead played a role in the big crime drop of the 1990s. MacDonald is engaging in absurdities when she suggests otherwise.

Nor have “family and other informal social controls” broken down. Not in any way that affects the crime rate, anyway. The evidence against this hypothesis is overwhelming. It needs to die a decent death.

Finally, it’s worth noting that because the number of murders is relatively small, it’s not unusual to see fairly large annual changes. We won’t know for years whether the murder rate really went up 11 percent in 2015, but even if it did, it wouldn’t be that surprising. Between 1985 and 2012, the FBI recorded five years in which the murder rate in America’s largest cities increased or decreased by more than 10 percent.

That said, an 11 percent spike is still substantial. If it’s real and persistent, it deserves attention. No one should pretend that it’s just a “modest” increase or a “small blip.”

My recommendation: Both sides should cool it. Mac Donald is right to be concerned that this year’s increase could be bad news if it marks the beginning of a trend. We should keep a close eye on violent crime data—not just murder rates—over the next year or two. At the same time, liberals are right to be skeptical that the “Ferguson effect” is a long-term problem. Most likely, everyone will either adjust to it or forget about it by this time next year. And both sides should be concerned about finding the right policing balance in an era of ubiquitous cell phones and body cams.

Waiting too long to acknowledge a problem can sometimes be disastrous, but a few months is a pretty short time and murder is a pretty small sample set to draw any firm conclusions from. Everyone should calm down a bit and wait to see what the next year or two bring.

UPDATE: New York City has been ground zero for a lot of “Ferguson effect” changes. Since the middle of last year we’ve seen protests over Eric Garner’s death; the end of the stop-and-frisk program; several police murders; and a deliberate slowdown in police activity. But today the New York Times reports that the murder rate is up only slightly and overall violent crime (murder, rape, robbery, assault) is down significantly since the end of 2013. In other words, let’s all wait a bit for more concrete statistics before we hit the panic button.