Devin Nunes represents the conservative 22nd district of California. It’s an inland district near Fresno that’s about 60 percent Republican and voted decisively for both John McCain and Mitt Romney. As you can see from the chart on the 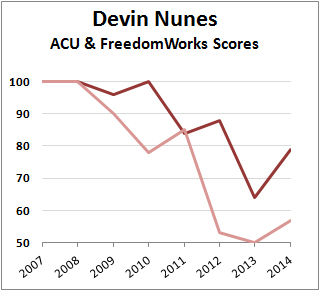 right, Nunes used to be a pretty reliable conservative, earning high scorecard ratings from both ACU and FreedomWorks. But over the past few years, as the tea party has taken charge of the GOP, he’s drifted away from the true conservative cause. Why? Ryan Lizza tells us part of the story:

Nunes, who is the chairman of the House Committee on Intelligence, told me that the biggest change he’s seen since he arrived in Congress, in 2002, is the rise of online media outlets and for-profit groups that spread what he views as bad, sometimes false information, which House members then feel obliged to address.

….“I used to spend ninety per cent of my constituent response time on people who call, e-mail, or send a letter, such as, ‘I really like this bill, H.R. 123,’ and they really believe in it because they heard about it through one of the groups that they belong to, but their view was based on actual legislation,” Nunes said.

“Ten per cent were about ‘Chemtrails from airplanes are poisoning me’ to every other conspiracy theory that’s out there. And that has essentially flipped on its head.” The overwhelming majority of his constituent mail is now about the far-out ideas, and only a small portion is “based on something that is mostly true.” He added, “It’s dramatically changed politics and politicians, and what they’re doing.”

This is the electorate that Donald Trump appeals to—and it’s why he’s dangerous regardless of whether he wins the Republican nomination. He says that thousands of Muslims in Jersey City celebrated on 9/11, and this gets repeated endlessly by right-wing media and conservative fundraising groups who are always on the lookout for something new to scare people with. Then these people start deluging their representatives with demands that they do something about all the Muslim celebrations on 9/11. Rinse and repeat weekly.

Nunes is no lefty. But he’d like to actually pass conservative legislation instead of wasting his time fending off nutballs. That makes life pretty tough for a Republican these days. They may be in the majority, but until they do something about their out-to-lunch faction they’re not going to get much done.