We’re in a war of civilizations. If you won’t say radical Islam, you aren’t serious. We need to fight them there so we don’t have to fight them here. They hate us for our freedoms.

I really hoped I’d heard the last of this nonsense around 2003, but I guess not. The sensibility of the post-9/11 warblogs is back, along with all the overweening confidence in amateurish geo-religious belligerence that fueled them the 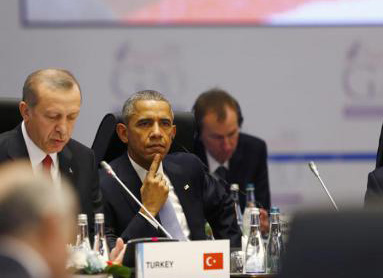 first time around. But at least this time, in the midst of the panic, we have a president who says this when he’s asked about committing more ground troops to the fight against ISIS:

We would see a repetition of what we’ve seen before: If you do not have local populations that are committed to inclusive governance and who are pushing back against ideological extremists, that they resurface unless you’re prepared to have a permanent occupation of these countries.

The war against ISIS will be won when Iraq gains the political maturity to provide a working army that’s not merely a tool of the endless Sunni-Shia civil war in the Middle East. Absent that, we could turn Anbar into a glassy plain, and all that would happen is that something worse than ISIS would crop up.

There’s a lot we can do to defeat ISIS, and most of it we’re already doing. Airstrikes? Check. Broad coalition? Check. Working with Arab allies? Check. Engage with Sunni tribal leaders? Check. Embed with the Iraqi military? Check. There’s more we could do, but often it’s contradictory. You want to arm the Kurds and create a partnership with the Iraqi government? Good luck. You want to defeat Assad and ISIS? You better pick one. You want to avoid a large American ground force and you want to win the war fast? Not gonna happen. Everyone needs to face reality: This is going to be a long effort, and there are no magic slogans that are going to win it. Unfortunately, they can make things worse.

The Paris attacks were barbaric and tragic. Let’s try not to turn our response to them into a tragedy as well.